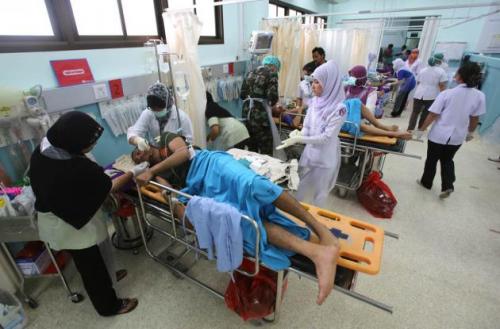 
Blast in Yala injures eight soldiers
The Nation / Phuket Gazette
PHUKET: Eight soldiers were slightly wounded in a roadside bomb attack in Yala’s Raman district yesterday and authorities believe an insurgent group led by Saifulloh Balor might be behind the attack.

Even though it was agreed at the peace dialogue with separatists that violence would be brought to a halt during the holy month of Ramadan, a homemade bomb was planted and detonated to harm the soldiers who were patrolling near the railway track in Tambon Balor at about 8am.

An investigation found that the blast, which left a 3-metre-wide and 1.5-metre-deep crater in the road, had also damaged the team’s truck. Train services from Yala to Narathiwat’s Sungai Kolok were immediately suspended pending investigation.

In comparison, the atmosphere at markets in Tak’s Mae Sot district was festive as Muslim people gathered to buy and sell food to break the Ramadan fast. These included people of Thai and Myanmar descent, who stocked up on desserts and other popular dishes.

“Supachai also apparently approved more than Bt12 billion in loans for associate members, which is against the cooperative’s rules,” Kitikong Kanajan, an official from the Department of Special Investigation, said yesterday.

Supachai now owns more than 300 properties, he said. “We have uncovered crucial evidence against him,” Kitikong added.

Supachai, however, has denied charges of embezzlement. A source said he cancelled his appointment to testify to the Anti-Money Laundering Office yesterday, citing the need for more preparation.


PM, brass put on show of solidarity
The Nation / Phuket Gazette
PHUKET: Prime Minister Yingluck Shinawatra said yesterday she had never been suspicious of the military and would not interfere in the military reshuffle.

The prime minister held a meeting with the Supreme Commander and the chiefs of the three armed forces, as well as Deputy Defence Minister Yuthasak Sasiprapha, before holding a press conference with them standing behind her.

She said she had come up with policies for them to implement aimed at solving the insurgency in the three southernmost provinces and to prepare the country for the 2015 launch of the Asean Economic Community. She also promised to support the military in carrying out its mission.

Asked if she would ask Yuthasak to step down after the leaking of an audio clip that was suspected to feature a conversation between the deputy minister and former prime minister Thaksin Shinawatra, Yingluck said, “How can you ask this question? Don’t you have any consideration for him? He [Yuthasak] is standing here.”

Earlier yesterday, anti-government protesters unsuccessfully attempted to block Yingluck from entering the ministry as she began her first day of work there.

Police temporarily closed roads near the ministry to traffic to allow the PM’s van to enter.

Yingluck paid respect to the ministry’s spirit houses. Reporters and cameramen were banned from getting too close to her.

Rallying against the clip

Around 300 anti-government protesters tried to block the entrance to the ministry in a show of opposition related to the content of a controversial audio clip recently posted online, but police prevented them from getting close.

Police arrested Army Captain Songklod Chuenchupol, aka Captain Pookem, after he lay down on the road in front of the ministry.

The prime minister earlier cancelled her plan to worship at the City Pillar Shrine.

The controversial audio clip features a conversation between two men, one of whom has been identified as former prime minister Thaksin by his son, Panthongtae. On the tape, they discuss a wide range of politically sensitive issues including a plot to get military support to bring Thaksin back home. Thaksin lives in self-exile abroad after fleeing a corruption conviction.

They said they wanted to block Yingluck and Yuthasak from being welcomed into the ministry by a parade of the three Armed Forces’ guards of honour.

Nine companies of soldiers and police led by Bangkok Police chief Pol Lt-General Kamronwit Thoopkrachang have been stationed at the ministry to maintain security.

Tul said his group disapproved of the fact that Yingluck doubled as defence minister because the move is seen as interference in the military, especially the annual military reshuffle at the end of the year.

They also objected to the discussion heard in the controversial clip.

“People would be upset if the military top brass allowed themselves to become the tools of politicians.’


Cat-smuggler held, felines were en route to Vietnam
The Nation / Phuket Gazette
PHUKET: Yesterday 90 cats were saved from the dining table when police intercepted a pickup truck at 2.30am with six cages in Nakhon Phanom’s Ban Phaeng district.

Sodsai Umpawa, 26, said a Maha Sarakham investor paid him Bt2,000 to Bt3,000 per trip to deliver the felines to a middleman on the Mekong River, who then shipped them to Vietnam where they could fetch good prices for their meat.

Sodsai was booked for cruelty to animals and transporting livestock without a proper health check or permit.

The cats would be sent temporarily to a quarantine station.

In this first case of cat smuggling for their meat, police suspect that this gang might be backed by the same group of Maha Sarakham investors funding dog-smuggling activities.

While the consumption of cat meat is considered taboo in many places, it can be found on the menu in some parts of Asia, especially China and Vietnam.

The smuggling of canines is illegal in Thailand, but thousands of them continue being trafficked live to nearby countries like Vietnam each year.

The drivers are usually charged with exporting animals without a permit or with transporting unvaccinated animals and often escape with light punishment.