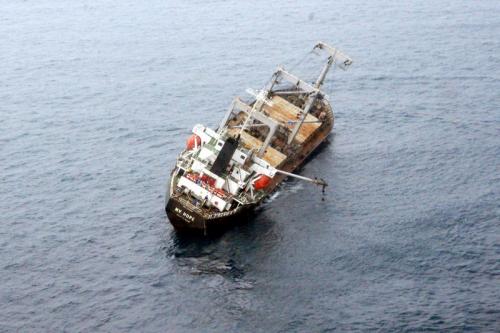 PHUKET: The Royal Thai Navy today called off its search for the remaining missing crewmen of the Bangladeshi cargo ship MV Hope, which capsized in heavy seas south of Phuket on Thursday night (story here).

The news comes after the search yesterday failed to locate any more of the missing crewmen, Capt Thammawat Malaisukkarin, Director of the Naval Civil Affairs told the Phuket Gazette.

The Royal Thai Navy team also recovered two bodies during the search, which the Gazette was told this morning have yet to be identified.

“Our next mission is to salvage the Hope,” Capt Thammawat told the Gazette.

“The Navy is providing support for the MV Confidence, which was commissioned by the Hope‘s insurance company to render assistance and carry out repairs. The Confidence arrived in Phuket yesterday.

“A tow boat started towing the Hope south, away from the nearest islands so the repairs could be carried out safely away from land,” Capt Thammwat said.

“We were going to tow the Hope back to Phuket, but the salvage team went on board and discovered that the ship’s engine still works and that the ship does not seem to be taking on any more water,” he added.

The salvage team is expected to take about five days to repair the Hope so the ship can be sailed back to a safe port.

“If the weather allows them,” Capt Thammawat said.

“The Royal Thai Navy is providing a helicopter, a dive team and a speedboat to support their mission,” he added.