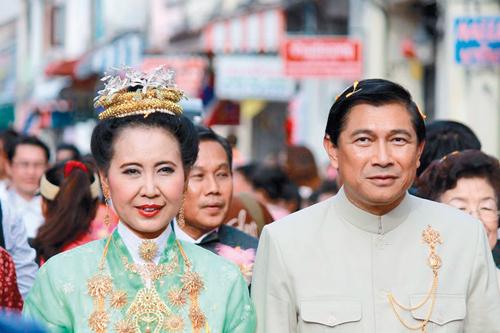 PHUKET: The Peranakan Association and the Tourism Authority of Thailand (TAT) Phuket along with local government officials organized a mass “Baba Yaya” wedding ceremony recently at the Blue Elephant restaurant in Phuket Town.

The event was held to celebrate over 200 years of local traditional weddings in the “Baba Phuket” style, and to promote the island as a wedding and honeymoon destination.

Baba and Yaya are terms used for the descendants of late 19th century Chinese immigrants to Phuket. Baba is used for male and Yaya for female.

Baba men and Yaya women have a long tradition of getting married in a unique style, and in recent years having a Phuket Baba Yaya wedding has been an increasingly popular option for visitors to Phuket.

The Baba wedding has become an annual event in Phuket and upholding the long ancestral tradition is considered the duty of each new generation.

There were six couples participating in this year’s special wedding ceremony, as well as two honorary couples – Phuket Governor Maitri Inthusut with his wife Red Cross president Pavinee Inthusut and Muang District Chief Supachai Pochanukul and his wife, who renewed their wedding vows.

Dr Kosol Tang-Uthai, president of the Thai Peranakan Association said: “The ceremony was held to conserve the great tradition of Peranakan, which is inherited from generation to generation

“There is traditional clothing, food and music and the tea ceremony takes place in a Hongyok building, a famous ancient building in Phuket, which acts as the bride’s house.

“The Blue Elephant restaurant is a romantic venue for wedding ceremonies and receptions and that is where the wedding party went in the evening, after the tea ceremony and the parade in Phuket Old Town,” he said.

Chanchai Duangjit, director of TAT Phuket office said: “TAT has continuously supported the Baba Yaya wedding every year, and we also put this event on the official TAT calendar for June.

“This will help promote the ceremony to tourists and let them know that Phuket is a great destination for weddings and honey- moons with a unique tradition in Thailand,” he said.