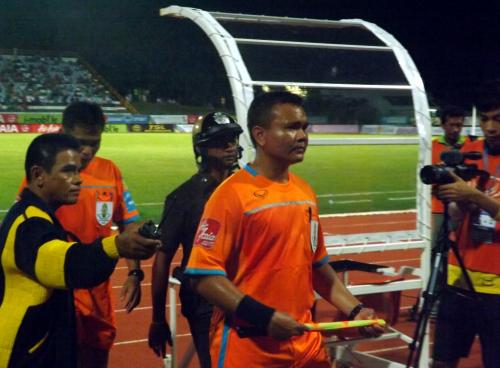 PHUKET: An ever-determined 10-sided Phuket FC let their 2-1 lead against Yamaha League One (YL1) rivals Big Bang Chula United, slip away in the final minute of added time in a highly-charged fixture.

Played on Saturday evening at Surakul Stadium, just under 4,000 spectators turned out, including some 300 pink-shirted BBCU fans – some rumored to be locals coerced to (shamefully) cheer for BBCU, by their employer, 3BB Broad Band internet, who are prime sponsors of BBCU.

The game was the 18th of 34 league matches, or the first of the YL1 2013 season’s second half for Phuket and BBCU, who as a result of the draw and two other YL1 matches played on the weekend, were subsequently bumped down two ranking spots, from 6th and 7th, to 8th and 9th place of the 18-team league, respectively.

Kick starting the evening’s emotional roller coaster was the BBCU Pink Panther’s towering Cameroonian, Bouba Abbo, who headed his side ahead from a well placed cross in the third minute.

Back and forth exchanges ensued to no avail, but home fans would be appeased before the half was over, thanks to an own-goal credited to BBCU’s Sitthisak Tarapanand.

The match’s referee found himself in the cross hairs of Surakul Stadium’s full fury, when in the 2nd minute of added time, Phuket’s newest signing, a hot-headed Thai midfielder Aleef Po-ji was dismissed for aggressively protesting an initial yellow card challenge.

Despite being a man down, Phuket came out of the locker room on the attack, bringing in a new super-sub, the short-yet-swift, skillful and powerful Cameroonian striker, Ludovick Takam, who netted a goal on 76 minutes, after only his third touch.

What ensued can only be described as a dramatic stand-off, in which time was cunningly burnt off by the home team, complemented by a series of emotional “scuffles” between players.

However, just when Phuket FC fans were getting ready to go home in celebration, deep into the third minute of four minutes of added time, BBCU’s Veerayut Jitkuntod was on target with a long range effort.

The 300-strong pink-clad contingent on the North bleachers under the old scoreboard erupted into cheer, as the visitors bench synchronously exploded out and onto the pitch as if they’d just won the World Cup.

Moments later, the match’s second red card was dished out, with BBCU’s Salahudin Aware taking the fall for his team’s over-energetic and borderline-belligerent celebration, highlighted by the booting of Phuket players’ water bottles.

Meanwhile, at the top of the league, Air Force United flew far ahead of the rest of the YL1 with their 2-1 win over the lowly Rayong FC Wild Stallions.

The Blue Eagles now have 43 points in distant first, trailed by PTT Rayong (37 points), who maintained their second place position after their goalless draw with the Thai Tobacco Monopoly, who remain in 16th place of the 18 team league.

The Bangkok FC Iron Bulls kept their third place standing with 32 points following their 2-1 victory over the Korat SWAT Cats, who subsequently dropped into sixth.

Trat FC, whose 1-0 win over the Khon Kaen T-Rex leap-frogged the “Albino Elephants” with 27 points into fifth.

With a “half-a-game” in hand, Phuket can seize back fifth place from Trat if they defeat second place PTT Rayong at home next Saturday, July 13.

To be played out at Surakul Stadium (click here for map), kickoff will be 5pm, and admission will be free, as only 40 minutes remains on the clock. In the first match on June 9 weather conditions forced officials to abandon the game, with the scoreboard untroubled during play so far (click here for article).

The game is this Wednesday, July 10 with a 6:30pm kickoff at SCG Stadium, AKA Thunderdome Stadium and Yamaha Stadium.

It is likely that the 15,000 capacity stadium will be fully packed with several hundred Phuket fans planning to fly, drive and bus it up to the capital to attend the mid-week match.

Stay tuned for the most comprehensive Thai Footy progress and coverage.

All YL1 Fixtures from the weekend: