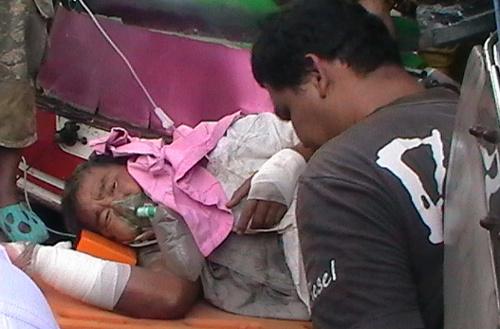 PHUKET: A school bus carrying students home from a field trip flipped in Krabi yesterday, injuring 12 students and the driver, but causing no deaths.

The busload of 49 students, all 13-year-old children, and their teachers had visited the popular Emerald Pool in Krabi and were heading home in a convoy of eight buses when the accident occurred.

The group were returning to their homes in Cha-uat District in Nakhon Sri Thammarat, renowned in national news this past week as the epicenter of violent rubber protest riots (story here).

Driver Veera Loyvanich, 62, lost control on a sharp curve and was left pinned behind the wheel after the accident, said Lt Col Pratuang Wongdech of the Khlong Thom Police.

“Mr Veera was first sent to Khlong Thom Hospital then transferred to Krabi Hospital, in Krabi Town, for better medical treatment,” he said.

The injured children received first aid at Khlong Thom Hospital and have all been released, Col Pratuang said.

Who let the Phuket python out?