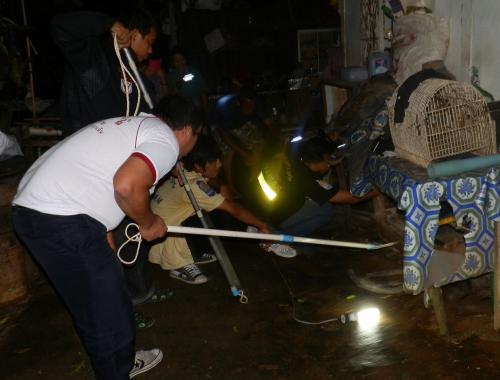 PHUKET: Man’s best friend – in the form of two pet dogs – last night alerted a Phuket resident that a three-meter python had slithered its way into his storage room in Thalang.

“I was inside the house when I heard two of my dogs barking outside. I thought something might have happened, so I went outside to check,” said Somkiet Thititrairat.

“I saw one of my chickens lying dead in front of the storage room outside my house and when I looked inside, I saw a big python,” he added.

“First it hid under a pile of wood, then it moved under a piece of furniture. It took 30 minutes for us to get it out,” a rescue worker said.

The python was released at an undisclosed jungle location.