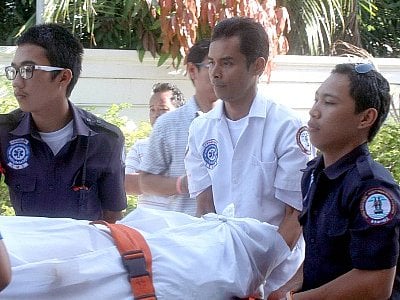 PHUKET: Staff arrived at the HomePro Village in Chalong this morning to find a retired Swedish expat hanged from a drainpipe at the back of the complex.

Sub Lt Kraisorn Boonprasob of the Chalong Police told the Phuket Gazette that he was notified of the discovery at 7:30am.

“When we arrived, the wife of the man was already at the scene. However, we have yet to question her about the incident as she was in deep emotional distress at the time,” he added.

Lt Kraisorn named the deceased as Per Ake Ingvar Arvidsson*, 67.

“He and his Swedish wife, who is also in her 60s, moved to Thailand two years ago. The couple lived in the area, but lately had been arguing a lot.

“Both of them had come to the Chalong Police Station yesterday to try and find a solution to his claim that she had taken his passport and car, which he wanted returned,” Lt Kraisorn explained.

Despite the arguments between the two, police believe the death was suicide, he added.

World Sports: Update of action and news from across the globe