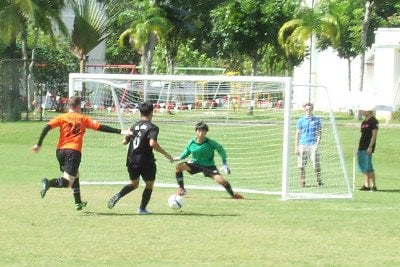 The tournament is now in its 11th year and 23 schools from South Korea, China, Malaysia, Vietnam, Indonesia, Brunei and Singapore brought with them a total of 88 teams.

This morning started with a welcome from BIS Phuket’s headmaster Neil Richards before the first games, which started at 8:15am under a blue sky and blistering heat.

Teams compete in various age groups from under 9 to over 15 boys and girls. The matches are played across 10 grass 7-a-side pitches over two days. The first day’s action was a league format to determine which teams will play each other in the playoffs tomorrow.

Rex Grey, athletic director of BIS Phuket spoke to the Phuket Gazette about what attracts BIS Phuket kids and international schools to the tournament:

“There is nothing equivalent to this in Southeast Asia. It is good for BIS Phuket kids, as in some age groups we have two teams, so it allows for our kids to get some good football experience. The BIS kids are not charged to compete in it, so it’s a big tournament they can go to for free.

“It’s a very popular tournament. Schools love coming here. A lot of the schools that come here don’t have the same grass facilities that we have. For a number of kids that come here this will be the first time they have played a number of games on a nice grass surface,” said Mr Grey.

Children from foreign schools are staying in boarding houses at BIS Phuket, Boat Lagoon and Royal Phuket City among other hotels on Phuket.