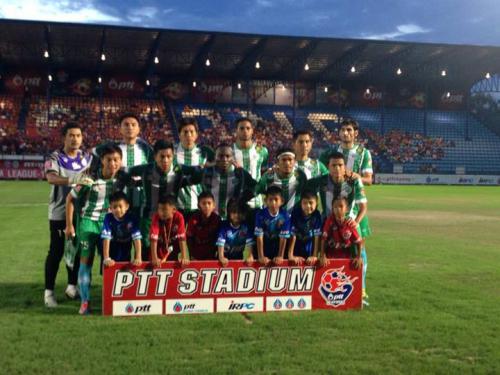 PHUKET: Despite drawing first blood in a difficult away fixture on Saturday evening, Phuket FC went on to lose 3-2 to Thailand’s Yamaha League One (YL1) powerhouse, PTT Rayong.

The match, both side’s 32nd of 34 scheduled fixtures in the YL1 2013 season, was played in front of 3,669 spectators at PTT Stadium on the lower part of Thailand’s Eastern Seaboard.

Going into the match in 9th place, Phuket were under minimal pressure with nothing to lose or gain beyond pride, having guaranteed themselves survival from relegation.

On the contrary, their 2nd placed opponents, PTT Rayong “Fire Power” needed all three points to underline their promotion credentials to the Thai Premier League. With the top three teams gaining promotion and leaders Airforce AVA FC already sealing one berth to the premiership, Rayong showed some nervousness at the start of play.

Phuket FC would raise the stress levels on the Rayong bench when in the 11th minute, Giorgi Tsimakuridze, who after a closely-tracked run down the touch line, crossed the ball to the edge of the box, where Ludovick Takam headed the well-weighted delivery into the back of the net for his fifth of the season.

After that, chances were enjoyed at both ends of the pitch, until an equalizer came on the 37th minute mark, when PTT’s Slovakian midfielder Jozef Tirer scored a beautiful goal from a free kick to the goalkeeper’s far post.

The score remained 1-1 going into half time, and nearly 20 minutes into the second half, until the home side gained the upper hand when Thai striker, Pipat Thonkanya received and converted a fantastic through ball from speedy Amadou Ouattara. It was Pipat’s 7th of the season.

Also scoring his 7th in the game thanks to an assist from Ouattara was PTT’s other Thai striker Kirat Keawsombut, who on 73 minutes headed in a cross from the skillful Ivorian.

Down 3-1, Phuket fought back and Giorgi would match Ouattara on assists when he crossed the ball from near the touchline again to the 18-yard-line for the second time of the evening, this time finding team captain, Eakartit Somjit open, who brought the ball under control and fired to the near post. PTT’s keeper got a hand on the ball, but the deflection proved to be in favor of the visitors who stabbed the ball home.

The score remained 3-2 to the final whistle. For video highlights, including all the goals, click here.

Phuket fell into 10th place as a result, while PTT Rayong, with 65 points almost look certain of a promotion berth, but will need at least one point from either of their final two matches to ensure their upward destiny.

Phuket now return home and are set to play their final home match of the season, against last-placed Rayong United.

To be played at Surakul Stadium on Saturday, October 26, the match will kick off at 5pm – NOT 6:30pm like usual, as all 18 teams must play the same time for the final two matches.

Phuket will conclude their season away to Nakhon Ratchasima FC on November 2.