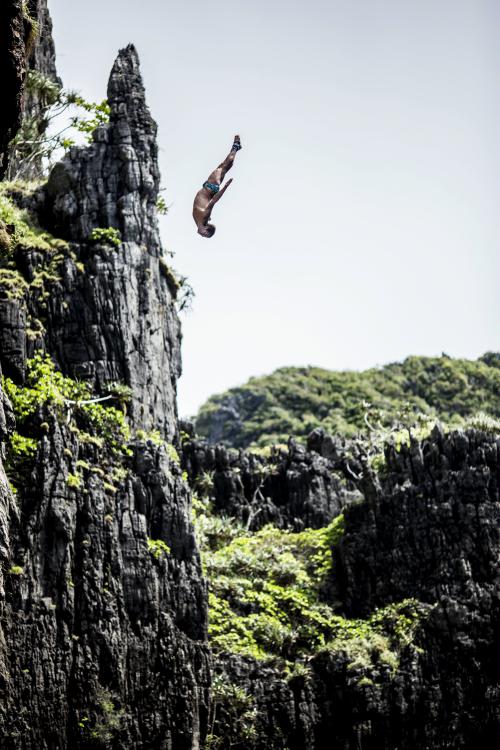 PHUKET: Is throwing yourself off an 8-storey-high cliff a good idea? Sure it is! Especially to the brave contenders of the Red Bull Cliff Diving World Series.

If you wish to see these daredevils, the season finale will take place in Krabi, a few hours drive from Phuket, on Saturday, October 26.

Ten of the world’s best cliff divers launch from 27 meters with no protection at all, except their concentration, skill and physical control. They add flips and twists to their freefall and hit the water three seconds later. All this performed in the stunning landscapes of Krabi. The Gap, Maya Bay, Viking Cave and Hong Island – the names are just as unique as the venues themselves.

The 2013 Red Bull Cliff Diving World Series is the platform for breathtaking action and beyond-belief complexity, spotlighting the sport’s top athletes as well as young talent. In its fifth season, the World Series title is decided during eight competitions across Europe, Asia, North and South America between May and October.

Before this extraordinarily high-level cliff diving season comes to an end, two athletes are still in the reckoning for the overall victory – three-time winner Gary Hunt, from England, who leads the pack by 120 points, and Artem Silchenko, the season’s early back-to-back winner who has finished the World Series in the top three in three of the past four seasons.

After the last stop, the World Series points-scratch-system applies – whereby each diver strikes their worst individual result from the previous six competitions – all of which means that 29-year-old Russian Silchenko needs a victory or a second-placed finish ahead of Englishman Hunt to take the crown and become champion for the very first time in his career. The fight for the overall title is still open going into the final stop and will be fiercely fought until the last competition day on Hong Island.

The rock summits off the coast of Krabi are a geological wonder with limestone cliffs that formed 300 million years ago preceding human habitation that dates back around 40,000 years, and many have not yet been touched by human feet. In this pure sport’s first visit to Thailand the best high divers in the world will compete across unique natural cliffs.

Arguably the world’s most spectacular climbing site, Krabi’s cliffs are sharp, pocketed walls of rock each presenting different challenges; divers face tides, ocean currents and a steep rocky ascent before diving from up to 28m into the warm waters of the Andaman Sea.

For the first time ever, this unique marine landscape will provide the backdrop for the culmination of the Red Bull Cliff Diving World Series.

Rayong all but secure promotion at Phuket’s expense