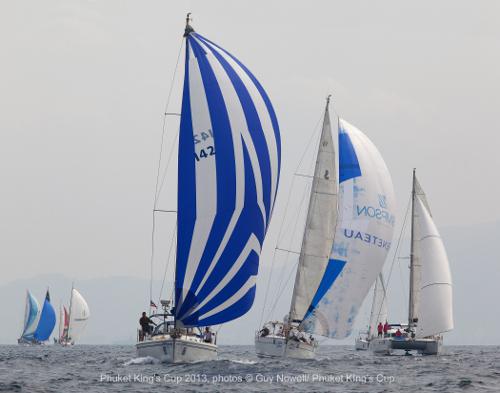 In the IRC0 class, Ray Roberts’ OneSails Racing team continued their exceptional form to secure another win today in race four, and a 2nd place in race five, won by Neil Pryde’s Hifi team. The team came in 3rd place in the final race of the day, with the last winner being team “Oi!” from Australia. Today’s results put OneSails Racing at the top of the table in IRC0, four points clear of Ahern Bailey Wilmer’s “Oi!”.

Ray Roberts, Skipper of OneSails Racing, said, “We have a crew which consists of English, Malay, Australian and Singaporean sailors, a mix of professional (full-time) and amateur sailors. Our big advantage has been in our new sails, which are fused with carbon fiber; we have a lighter sail and a different shape. Apart from this, the light conditions require a mix of understanding of sail shapes, weather patterns, sailing tactics, race craft relative to the wind, so you need people who are highly proficient. We raced our first King’s Cup in 1995 and won it, plus a further two King’s Cup wins after. We are now focused on this week as being our fourth King’s Cup victory.”

IRC1 class yesterday was won again by Bill Bremner’s Foxy Lady VI, following several excellent wins over the first two days of racing. Yesterday’s final race went to EFG Bank Mandrake team, with Foxy Lady in 2nd place – the first time they have not won this week. Foxy Lady and her crew are shaping up to be clear favorites in IRC1 however, with a huge point advantage going into the final two days.

In IRC2, Yasuo Nanamori and Karasu took victory with another excellent couple of runs, achieving two wins yesterday and establishing themselves as unrivaled leaders in the division; they have won every race they have entered in this year’s Regatta.

In Premier class, Pine-Pacific were once more a long way ahead of all rivals, finishing first and consolidating their position at the top of the table.

Ithinai Yingsiri, Skipper of Pine-Pacific, said, “The preparation we have undertaken with a crew that was together for last year’s Regatta has been key to our success so far. We were 2nd last year but this time we are enjoying winds between 10 and 12 knots which is suiting us well. If the wind stays reasonably strong tomorrow, we will maintain our advantage over the lesser-handicapped teams. If we continue to make strong improvements and keep away from making any mistakes, we can be class winners at this year’s Regatta.”

Amongst the Sports Boats, IPPAI followed up their great form with another two wins, with rivals Planet Blue finishing in 4th (last) place in both races yesterday. The Japanese team look unassailable at the top of the class, having won all but one of their races.

In the Bareboat Charter class, Venture (AUS) were fastest on corrected times. The team is sitting on top of the table but a large number of competing teams are separated by small points differences.

In the Open Charter class, Gokova Sailing Agata won yesterday giving them a good chance to catch up with Sarawadee who lead the table.

The Firefly 850 Sports class is being dominated by John Newnham skippering “Twin Sharks” with the team achieving another two class victories yesterday. They are now firmly at the top of the table in this one-design series.

In Multihull Racing class, Asia Catamarans Hurricane came in with another two wins to maintain their top-of-class position.

Amongst the Modern Classics, Jim Ellis’s Remington team were quickest again, following a win in the first two races, and now lead the division.

Sunshine Schooner skippered by Peter Wood was quickest again in the Classic class, to record another win on Regatta day three to stay top of the class.

Lady Bubbly won the Cruising class race yesterday, creating a nice duel to be played out over the Regatta with nearest rival Rumrunner11 skippered by Chris Hillier.

This year’s Regatta, the 27th Phuket King’s Cup, has delivered racing that has lived up to its billing as Asia’s best large sports sailing event. Combined with its renowned series of beach-side parties, great food, and drinks and hospitality provided by the Regatta’s sponsors, the 2013 “jewel in the crown of the Asian yachting calendar” will be another memorable King’s Cup year.

Following is the report for the second day’s action in case you missed it:

Changing winds made for a technical challenge and generally good racing conditions on day two of the Phuket King’s Cup Regatta, with top contenders across all classes looking for strong early point scores.

The level of competition in IRC0 class has been very high this year, with popular Thai team Won Marang struggling to make headway against faster boats. Skipper Kevin Whitcraft explained, “Yesterday we had challenging wind that was constantly shifting, which is good fun but leaves no room for error with decision-making. The fastest boats were finished before the light wind set in, basically hampering the slower boats finishes. You simply need to sail the perfect race; we ran well downwind on the right spinnaker but missed our chance to change to a spinnaker more suitable to the ensuing lighter conditions. You need a bit of luck and a bit of skill also.”

IRC1 class yesterday saw yesterday’s victors Foxy Lady VI win again yesterday. The Singaporean team are establishing the pace early on but several teams will look to overturn their dominance over the course of the week.

The Royal Thai Navy team was victorious In IRC3 yesterday, racing home for the win following adjustments for handicap rating. LT. JG. Pontep Sookudom led his team to the line behind several rivals, but the team performed very well to overcome their handicap deficit.

In Premier class, Pine Pacific were a long way ahead of all rivals, finishing 1st and building upon their strong performance in the first race yesterday.

The third race of the Sports Boat class was won by Planet Blue, skippered by Kazumi Asai.

In the Open Charter class, Russian Maxim Taranov skippered “Little Eva” to take 1st place ahead of the “Sarawadee” team.