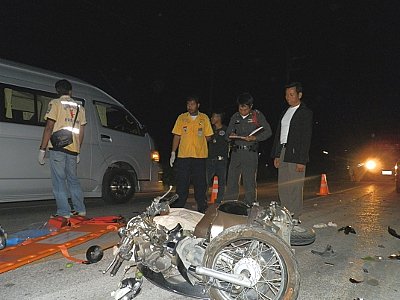 PHUKET: A woman seven months pregnant was run over and killed by a speeding cement truck in Patong yesterday. Hours later a man died in a high-speed motorbike collision on the Old Airport Road on Phuket’s west coast.

A report in Siangtai Daily named the woman in the Patong accident as 31-year-old Indonesian national Erna Dahlan.

Police arrived at the scene on Nanai Road in Patong at about 5pm to find more than 100 people silently staring at the bodies on the road.

Ms Dahlan’s body was pinned under the wheels of the cement truck. The unborn child was also dead.

Through his tears, Ms Dahlan’s English partner told police that he and Ms Dahlan were returning home from the Jungceyclon shopping complex when the accident happened. Ms Dahlan was riding side-saddle behind him and wearing a safety helmet.

The speeding cement truck hit the motorbike and Ms Dahlan was run over by the rear wheels, he said.

The driver of the cement truck, 49-year-old Kathu resident Aroon Boonnaburi, allegedly tried to flee the scene. He was stopped by local residents, who held him until police arrived, said the Siangtai report.

Later yesterday evening, one man was killed and another seriously injured in what police believe was a high-speed, head-on collision between two motorbikes on the Old Airport Road, which runs along the coast south of Phuket International Airport.

Police were notified of the crash at 9:10pm by residents of Sakoo Village 8.

Arriving at the scene, in front of a cement plant, officers found the body of 32-year-old Prasert Temkhaow lying on the pavement beside the crumpled remains of his motorbike.

Mr Prasert, originally from Chana district in Songkhla, rented a room in the area and worked as a cobbler, police investigation revealed.

He was wearing a black T-shirt with an image of a grim reaper with a dagger clenched between its teeth. Above the image was: “US Navy Seals ‘Survival of the Fittest'”. He was not wearing a safety helmet and died of massive head trauma.

About 10 meters away police found another badly damaged motorbike. Its driver, conscious but in shock, was later identified as 22-year-old Attapon Laolang, a resident of Sakoo Village 5.

Mr Attapon was rushed to Thalang Hospital for emergency treatment and then transferred to Vachira Phuket Hospital in Phuket Town.

Rescue workers said he suffered serious wounds to the head and chest. He was not wearing a crash helmet.

Police questioned local residents, none of whom witnessed the collision. They ran out to see what happened after hearing a loud crash, they said.

The area where the collision took place, about half a kilometer south of the Saladaeng Junction, is dark and dangerous at night, and the site of many accidents, the residents said.