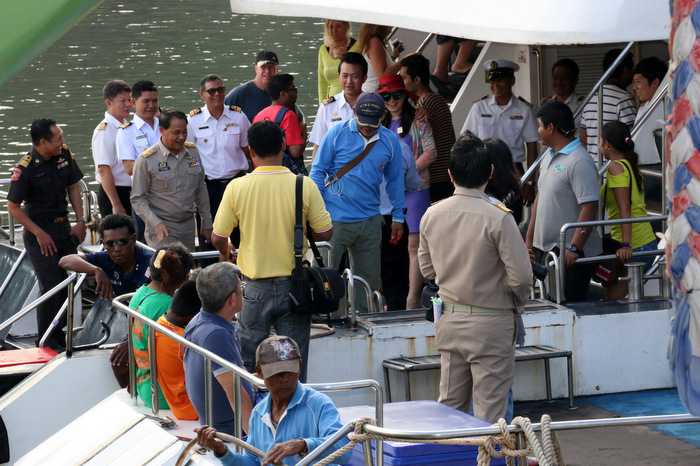 PHUKET: Rassada Pier – a bustling arrival and jump-off point for Phuket tourists – needs to be cleaned up, said Phuket Governor Nisit Jansomwong during his inspection of the facility today.

“They need to improve the sanitation and general aesthetics of the pier. We will coordinate with the Marine Office, local authorities and private businesses operating at the pier to make sure that the facility provides a clean, welcoming door step to the island,” Governor Nisit said.

The inspection of the facility was led by Phuket Marine chief Phuriphat Theerakulpisut and designed to ensure that safety regulations were being adhered to by tourists and boat operators. Though the conditions of the area caught the governor’s eye, he affirmed that his top priority was safety.

“Sea safety is one of my top priorities, as we are one of the best sea destinations in the world,” Gov Nisit said.

“The boats and their operators are fit for providing sea transport services, but the pier isn’t.”

Last year, more than 4 million tourists travelled to or from Phuket by boat, on more than 130,000 boat trips.

“We consider sea travel more dangerous than travelling on land,” Gov Nisit said. “We have to make sure all boats are safe before they depart.”

Officials have set up a “24 hour Sea Coordinating Operations Center” to monitor vessels operating in Phuket’s waters and to respond to any seaborne emergencies that may arise.