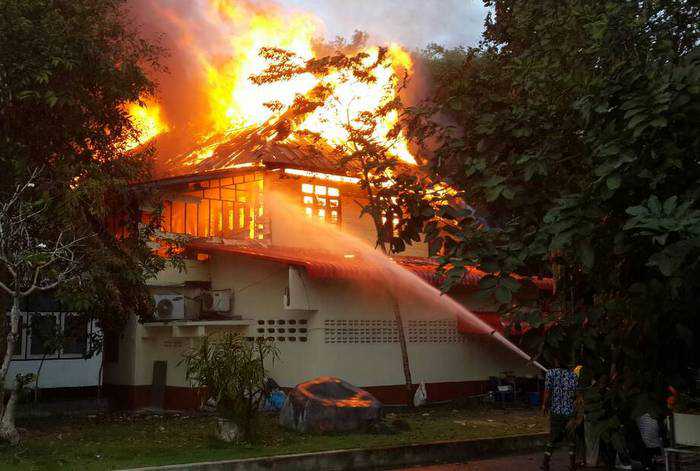 PHUKET: One novice monk was injured when a dormitory at a temple in Krabi was engulfed by flames yesterday evening.

Sarawut Likitkarn, 16, suffered from smoke inhalation and rushed to Krabi Hospital. However, doctors have since confirmed that he is in a stable, safe condition.

The fire broke out on the second floor of the monks’ dormitory at Wat Keaw Koraram. Built in 1959, the dormitory was renovated in October this year.

“I was working downstairs and saw smoke billowing down from the second floor. I noticed that it was coming from Mr Sarawut’s room,” said Phra Palad Boonlert Thammarokko, the abbot’s assistant.

“I called on other monks to help me put it out, but there was nothing we could do to stop it from spreading to neighboring rooms.”

Krabi City Police, rescue workers and firefighters rushed to the scene, with the latter taking about two hours to put out the flames.

“At this point we believe that the fire started from either an electrical short circuit or a candle,” said Col Wittaya Meksai of the Krabi City Police.

“However, we are investigating the matter and will question Mr Sarawut.”