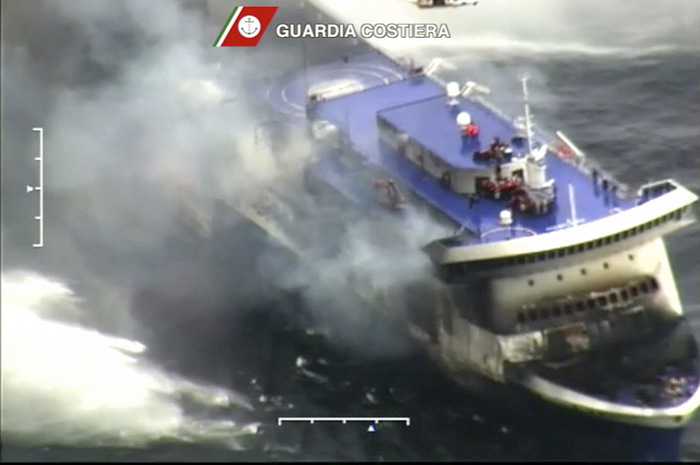 PHUKET: Rescue teams evacuated more than 400 people from a car ferry that caught fire off Greece’s Adriatic coast in a 36-hour operation on roiling seas, but 10 people were killed in the disaster.

Italian and Greek authorities continued an air search of the sea around the vessel while they sought to verify the number of passengers who had been on board, fearing that many people could be missing.

The fire broke out on Sunday on a vehicle deck of the Norman Atlantic ferry, whose manifest said should be carrying 478 passengers and crew and more than 200 vehicles. Rescue efforts were complicated by bad weather.

Italian and Greek helicopters began airlifting passengers from the upper deck as the ferry drifted in rough seas between Greece and Italy on Sunday afternoon and continued throughout the night. Ten people aboard the ferry were killed, the Italian coastguard said.

“It was hell,” Dimitra Theodossiou, a Greek soprano opera singer, told Italy’s la Repubblica newspaper. She was evacuated by helicopter during the night.

“It was very cold, terribly cold. Nearby ships sprayed water from their hydrants (to fight the fire) and we were completely wet,” she said.

She was treated for a mild case of hypothermia at a hospital in Lecce, Italy, and later released.

The Italian captain, Argilio Giacomazzi, abandoned the ship once all others had been evacuated, Italian Transport Minister Maurizio Lupi said.

Fifty-six crew members were evacuated, while 234 of those rescued were Greek, 54 Turkish, 22 Albanians and 22 Italians, Lupi said.

He would not confirm a report from Greece that there were 38 still missing.

“It’s absolutely premature” to say how many are missing, Lupi said.

Some of those rescued were not on the original ship’s manifest, and Italian authorities are looking for a definitive list of passengers to cross-check it with the names of the survivors, he said, adding that it was possible that there were illegal migrants aboard.

A medical team and a flight operator had boarded the vessel to assist the passengers and crew during the rescue, the Italian navy said. Its San Giorgio amphibious transport ship coordinated the rescue operation.

A merchant ship carrying a reported 49 of the ferry passengers, including four children, arrived in the southern Italian port of Bari early on Monday.

Italian and Albanian magistrates ordered that the ship be seized in order to investigate the cause of the fire, which is still unknown, and magistrates in both countries are deciding together where the vessel should be towed, Italy’s Transport Ministry said in a statement.

The Italian-flagged ferry, chartered by Greek ferry operator Anek Lines, was sailing from Patras in western Greece to Ancona in Italy.

Italian Prime Minister Matteo Renzi, speaking at a year-end news conference in Rome, praised the work of the Italian-led rescue effort, which he said had helped avoid a “massacre”.