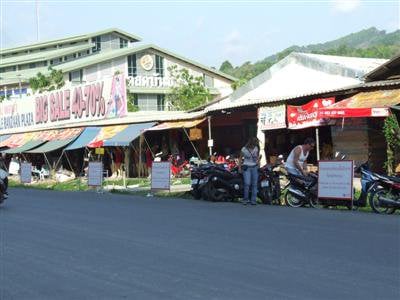 PATONG, PHUKET: In a bid to solve the worsening traffic problems in Patong, police are considering establishing a vacant lot behind Jungceylon as a center for the local car hire industry.

Many car rental companies are presently based along the heavily congested beach road, occupying much of the public parking spaces there.

He plans to raise the idea at a meeting of car rental representatives early next month.

In a related development, Col Jakkawat said Kathu Police have solved the problem of traffic congestion near the back entrance to Jungceylon by erecting no parking signs along a 100-meter stretch of Phang Muang Road.

Jungceylon has its own parking facilities, but many non-customers had been parking in the area. This caused traffic congestion, he said.

The signs, put up on Christmas Day and couched in colorful English, had helped traffic move much more smoothly through the area, he said.

People who ignore the signs will get verbal warnings until January 15, after which violators will find their vehicles immobilized by wheel clamps that won’t be removed until the owner pays a 300-baht fine, he said.

Asked about the plan to establish a new center for car rental businesses, Patong Deputy Mayor Chairat Sukhabaan said his office was not yet aware of the plans.

Phuket Governor Wichai Phraisa-ngop would have to be consulted before action to move car rental operators could go forward, he said.

In April 2008, Mr Chairat said that after Phang Muang Road was completed the municipality intended to clear the beach road of tuk-tuks and taxis, except those dropping off passengers. But this has not occurred, resulting in a deluge of harsh complaints from local residents and tourists alike.

Many tourists visiting Patong opt to rent cars or motorbikes rather than pay for tuk-tuk rides that start at 150 baht for even the shortest of journeys.

A motorbike can be rented for as little as 150 baht a day, while cars start at about 1,500 baht per day.

Last night, Kathu Traffic Police set up a checkpoint on Rat-U-Thit 200 Pi Rd near the intersection with Sainamyen Road, pulling over and fining foreign and Thai motorcycle riders for a variety of infractions, most typically driving without a license or not wearing a helmet.

Phuket to catch first glimpse of eclipse in Thailand