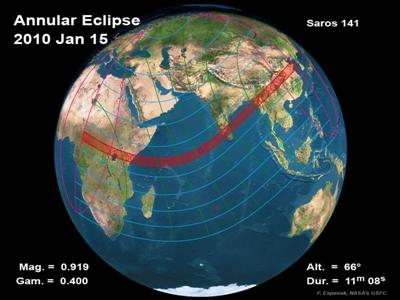 PHUKET: A partial solar eclipse on Friday will be visible in Phuket before any other province in Thailand, scientists say.

Asst Prof Dr Sakshin Bunthawin, head of the Biotechnology of Electromechanics Research Unit at Prince of Songkla University Phuket Campus, said the eclipse will begin at 1:51pm and reach its peak at 3.28pm, at which time 57% of the sun’s

surface will be obscured.

The entire event will last three hours and 34 minutes.

Because Phuket is the most westerly province of Thailand, the phenomenon will be visible here before any other part of the country.

The full ‘annular’ eclipse, the first anywhere in the world in 2010, will cast a 300km-wide track across parts of Asia.

Annular eclipses occur when the sun and moon are perfectly aligned, but the size of the moon appears smaller than the sun and a bright ring forms around the periphery.

The shadow will first become visible in Africa, its track then traveling east across the Indian Ocean to the southern part of India.

It will then pass through Bangladesh and Burma, ending in China.

The full eclipse will not be visible in Thailand, although more than 80 percent of the sun will be obscured in parts of the North including Chiang Mai.

Dr Sakshin said the best way to view the eclipse was by using a solar viewer or special telescope.

Lacking these, a rudimentary solar viewing device can be constructed by cutting a 1cm hole in a piece of paper and attaching it to a mirror, Dr Sakshin explained.

Then hold the mirror at an angle and project the Sun onto a shaded wall or into a garage. . The projected image will show the shape of the eclipse.

Dr Sakshin cautioned against looking at the reflection of the sun in objects like compact discs or tinted mirrors, as these might not sufficiently block the sun’s rays and could damage the eyes.

Enjoy the show because the world’s next solar eclipse, on July 11, will not be visible in Thailand.