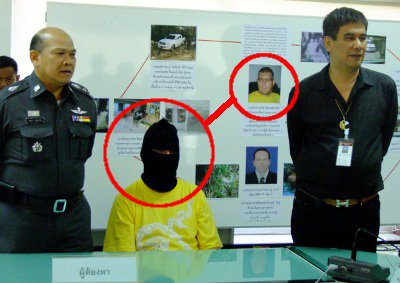 PHUKET: Moshe David, prime suspect for the murder of Hungarian businessman Peter Reisz in Phuket, was presented to the press today after his arrest in Bangkok yesterday.

During a press conference in Surat Thani, home to the popular tourist island Koh Samui, Provincial Police Region 8 Commander Gen Yongyuth Charoenwanit announced that officers were now searching for a Thai man implicated in the murder of Mr Reisz.

“Witnesses have told police that they saw Gyorgy Lajos Kvalka and a Thai man arrive together to rent a house near Makro Phuket. Police are now searching for Mr Kvalka and the Thai man,” he added.

“The arrest warrant for Mr Kvalka was issued yesterday. He is to be charged with the murder of Mr Reisz and with concealing the body,” he said.

During police questioning, Mr David claimed that Mr Reisz cheated him out of several properties on Koh Samui worth millions of baht, explained Gen Yongyuth.

After allegedly cheating Mr David out of the properties, Mr Reisz absconded to Phuket.

“Mr David and his Hungarian friend Mr Kvalka followed Mr Reisz to Phuket. They called Mr Reisz to meet them at a house that Mr David had rented for two days,” Gen Yongyuth explained.

“However, they did not sort the problem out at the meeting. A serious fight broke out in which Mr Reisz was killed.

Mr David and Mr Kvalka dumped the body in a rubber plantation, and then drove Mr Reisz’s white pickup truck back to Koh Samui.

The pair attempted to sell the truck, but failed, and abandoned it in Bophut.

The Phuket Gazette notes that although Mr David is being consistently identified by police as an Israeli national with a passport in the name of Moshe David, he is a dual national and also carried a Hungarian passport issued in the name Gabor Nemeth.

Phuket tsunami film ‘The Impossible’ drawing crowds, but no criticism