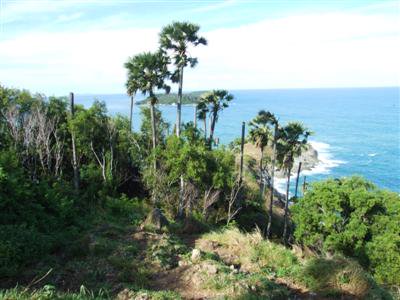 RAWAI, PHUKET: The beauty of Phuket’s famous Phromthep Cape is on the decline, the Mayor of Rawai warned yesterday.

The death of palmyra trees and the trampling of grass by tourists have left the promontory scarred by patches of dry, yellow earth, Rawai Mayor Aroon Solos said.

The two men have agreed to initiate a restoration project. New palmyra trees will be grown to replace the dead palms and an irrigation system will be installed to keep the grass green year round, he said.

The governor will assign the Phuket Provincial Agricultural Office to look after the new palmyras, he said.

Rawai Munipality will plant 40 palmyra palm trees at the end of this year and invite all the people of Phuket to take part in the event.

“As part of the project we will install an irrigation system and mark a path for tourists to follow. We won’t let the tourists stray off the track,” he said.

The municipality will also cut down acacia trees growing in the area.

“These weeds are sullying the beauty of the cape,” he said.

“The main point of the project is to make Phromthep Cape a more natural-looking viewpoint for tourists. We won’t build anything there,” he said.

More than one million people visit the site annually, he added.