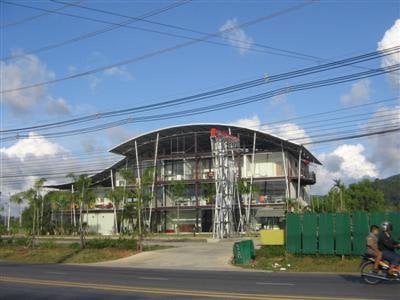 WICHIT, PHUKET: Software Park Phuket is to officially kick off services from its first phase of development with an opening ceremony tomorrow.

Director Kongkiat Kespechara said the soft opening is intended to demonstrate the readiness of the park’s facilities and its business-incubation center.

The first phase of development has cost about 25 million baht. The park has 1,250 square meters of floor space in a three-story building and has seven tenants, four Phuket-based software firms and three foreign entrepreneurs.

“The rental space is already fully occupied and we have five or six companies on our waiting list to rent space,” Mr Kongkiat said. “We are offering around 50 to 100 square meters to each tenant.”

Five “incubatees” have already moved into the center and the park expects to double this number by the end of this year. The number is expected to rise to 30 next year.

The park is owned and operated by a private firm called Blue Lagoon (Thailand), a subsidiary of Phuket property firm Anuphas Group of Phuket Senator Phummisak Hongyok, who has extensive undeveloped landholdings in Wichit.

The park’s second phase of development is about to begin. It will cost a further Bt1.2 billion, funded from a bank loan, an increase in the park’s registered capital and a joint-venture investment.

The second phase will involve the construction of a new five-story building providing 2,500 square meters of rental space, a 43-unit serviced-apartment block and a 400-seat meeting hall.

Some of these services are expected to be available by April next year, including the meeting hall and the rental space,” Mr Kongkiat said.

In October this year Software Park Phuket will be joined by Software Park Thailand in hosting the Regional Software Park Forum 2009. About 400 guests from the Asia-Pacific and Oceania region are expected to attend.

Already set up on the ground floor is Phuket Investor, a financial services company run by currency trader Ed Golding.