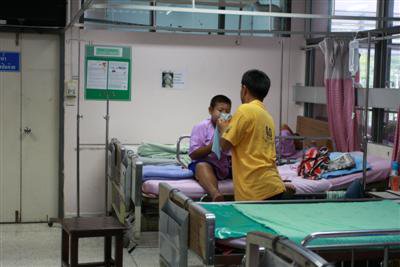 Sixteen children from Piboonsawaddee School in Phuket City were hospitalized after drinking the milk, while a further 32 students became ill but did not require hospital treatment.

The poisonings followed an incident at the end of February, when teachers at Laem Panwa School opened cartons manufactured at the Nong Pho Dairy Co-operative plant in Ratchaburi and found maggots wriggling about inside.

Similar incidents were reported in other provinces and subsequent tests revealed that some of the milk distributed under the project was not up to nutritional content standards.

In the latest milk mess-up, 48 fifth-year primary school students at Piboonsawaddee School came down with stomach aches, nausea and vomiting shortly after drinking Nong Pho milk at 8.30am yesterday.

The 16 most seriously ill children were sent to Vachira Phuket Hospital for treatment; 15 were discharged later that day.

One student kept overnight for observation was sent home today.

Phuket Public Health Office (PPHO) officers have sent samples of the milk, food and vomit to the new Phuket Medical Science Center in Thalang for analysis.

It could take up to one week before the results are known, however.

PPHO chief Dr Pongsawas Ratanasang said initial investigation suggests the cause of the illnesses was spoilage, as the the milk smelled bad and had already begun to separate.

Public health officers collected all the UHT milk cartons at the school and will send them back to the plant in Ratchaburi, he said.

“They have to solve this problem and find out why the milk was spoiled,” he added.

It is possible that the milk spoiled during transport, he said.

Piboonsawaddee School’s latest batch of milk was delivered during the school holiday in April. Some cartons had expiry dates of November 2009, while others were due to expire in January 2010.

The city will continue to give younger students bags of pasteurized milk distributed under the same program, he said.