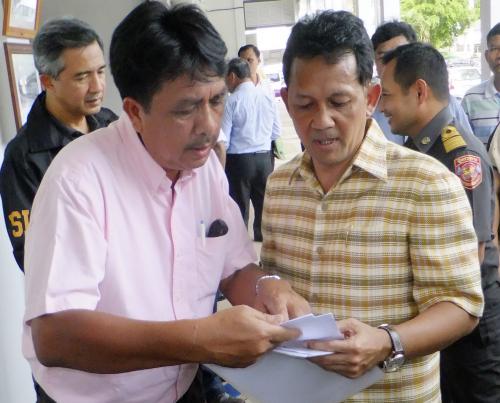 PHUKET: A group of legal tuk-tuk drivers have presented the Phuket Governor’s office with another formal complaint – the third so far in their campaign to stamp out the illegal tuk-tuk trade in Patong.

As on the two previous occasions (stories here and here), the tuk-tuk drivers were led by Sakol Srisompoch.

Their urgent concern is that illegal tuk-tuk drivers are taking away their jobs and their income.

“We filed our first complaint on June 26, and we followed it up with another on September 5. Instead of seeing the enforcement of the law, we are seeing the number of illegal tuk-tuks actually rising,” said Mr Sakol.

“The last time we drew this to the authorities’ attention, police officers said they would be stricter on the illegal drivers and press serious charges against them, but nothing has really happened,” he lamented.

Mr Sakol said the number of illegal tuk-tuk drivers had risen from 70 at the time he filed his first complaint to about 100 now.

“We urge the relevant officials to do something against these illegal drivers. They are stealing our money and our parking spots,” said Mr Sakol.

V/Gov Chamroen assured Mr Sakol, “The PLTO will form a team in cooperation with police to search and crack down on illegal tuk-tuks in Patong.

“Furthermore, we will conduct raids without advance warning. If we find any illegal operators, they will be hit with a fine of 2,000 baht,” he said.

Mr Sakol told the Phuket Gazette that the assurances are “good to hear”.

However, he insists that the fight against illegal tuk-tuk divers and what Mr Sakol sees as an apathetic officialdom is far from over.

“We will give the authorities 15 days to start actually doing something. If they don’t, we’ll be back,” he warned.