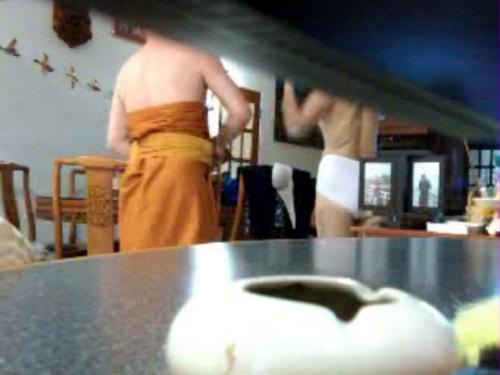 PHUKET: The Buddhist monk exposed by two sensational videos last night – in which he was pictured naked with his Phuket mistress, who already has a husband – has left the monkhood.

Phra Kru Boonyapinant, the former abbot of Wat Pamok in Kapong, Phang Nga, hung up his robes early this morning.

“Ajarn Reet gave no reason for his behavior,” confirmed Phra Theppanyamolee, the Lord Abbot of Phang Nga Province, who is based at Wat Prachoomyothee in Phang Nga Town.

“He arrived at the temple at 4am and asked to be excused from the monkhood,” Phra Theppanyamolee told the Phuket Gazette.

“He left the temple dressed in white clothes and was picked up by several of his followers. He did not inform me where he was heading,” the senior monk added.

Excerpts of the two videos, which have since gone viral on social media networks (video here), were broadcast on national television last night, showing Ajarn Reet with a married woman at a house in Thalang, Phuket.

Two hidden cameras in the house captured the monk and the woman in conversation, counting cash and eventually disrobing.

In one of the videos, Ajarn Reet can be heard saying, “It’s time.”

Then both he and the woman depart for the bedroom.

“After the video clips and pictures were shown on national news, we began to investigate the incident,” said Phra Theppanyamolee.

“We contacted Ajarn Reet, but he denied it, saying it wasn’t him,” he added.

Hours later, however, Ajarn Reet had a change of heart and told his superior that he would visit the head monk at dawn today.

Many villagers gathered at Wat Pamok this morning. Some shared gossip about the scandal, while others cried on learning that Ajarn Reet was no longer a man of the cloth.

“I believe he feels genuinely guilty for what he did. If monks realize they have done something against their faith, they can just leave the monkhood by themselves,” Phra Theppanyamolee said.