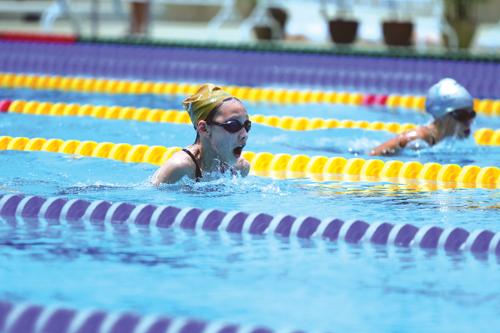 With 17 teams and 215 competing athletes; this event, part of a Rocket Science Sports Swim Championship series of age group swim races around the globe, lived up to all expectations.

One of the biggest success stories of the meet was the inclusion of five boys from Thalang and Bangtao schools. These boys were selected from a larger group of school participants from last year’s Iron Kids triathlon event held at TSLC.

Their participation at this year’s event was an incredible story of how with just one month of training, these five boys went from never having undertaken formal swimming lessons, to competing in one of Asia’s largest up and coming swim series – and performing incredibly well. So well in fact, that they finished as the 11th placed team.

Phuket-based Silverfinz, smashed team record after team record, and recorded one of their largest best time rates of the season, and were leading up until the final session of relay races.

It was here that the Ladies Recreation Club of Hong Kong provided strength in depth and Phuket’s British International School (BIS) fielded some strong final relays to snatch 2nd and 3rd.

After a full weekend of racing, the Top Team awards came down to a nail biting finish with the Ladies Recreation Club from Hong Kong taking the top honors, with BIS in second and Silverfinz in a close third.

Just 60 points separated the top four teams, and with the Top Male Award going to Gian Berino of Philippines (World Student Games representative), and Top Female Award going to Francesca Leung of Coast Aquatics, Hong Kong (Hong Kong National Team representative), the aim of this competition spanning a diverse range of abilities and demographics was exceeded beyond all initial expectations.