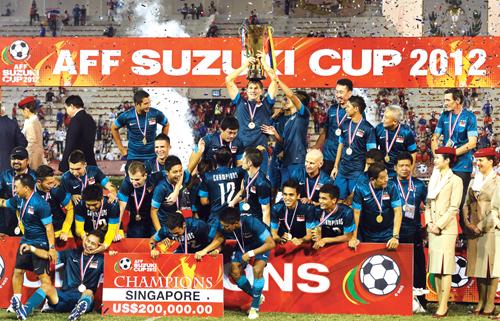 Speaking at the press conference before the start of the 2013 AFF Awards in Pahang, Malaysia, Duli Yang Teramat Mulia Tengku Abdullah ibni Sultan Ahmad Shah, the deputy president of the Football Association of Malaysia and vice-president of the Asian Football Confederation (AFC) executive committee, revealed that the competition will be jointly hosted again.

“The competition will be held in Vietnam and Singapore,” announced Tengku Abdullah.

Singapore, who claimed a record fourth title when they beat Thailand over two legs in the final in December, will host group matches at their new Sports Hub stadium, which is expected to be completed in 12 months time.

Vietnam will host games at the MyDinh National Stadium, where they won their only title in 2008.

This will be Singapore’s third time as hosts having last jointly hosted the competition in 2007 with Thailand, where they were crowned victors.

The inaugural competition was held in Singapore in 1996.

Vietnam have also hosted the competition twice before, in 1998 and jointly in 2004 with Malaysia.

Tengku Abdullah also revealed that the qualification process will be scrapped for the 2014 edition.

“We will revise the format of the competition whereby it will involve all countries without any qualifications,” he added.

For previous editions, the lower-ranked Asean teams participated in a short qualifier to reach the final tournament of eight teams.

The biennial Suzuki Cup features eight Southeast Asia teams split into two groups, with the top two from each contesting home and away leg semi-finals and finals.