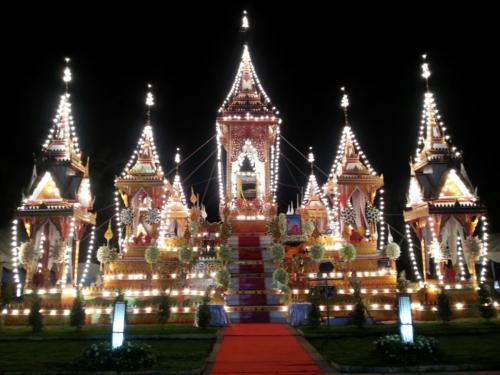 PHUKET: The cremation of the former abbot of Wat Chalong, Phra Ajarn Udomwetchakit Uttamuyano, will take place on Sunday using a ceremonial lamp given by His Majesty the King, which will arrive by plane on Phuket.

The funeral service, which began on Wednesday and culminates on Sunday, is being held at the special crematory in Wat Chalong and is open to the public.

“From April 4-6, we are offering lunch to monks and novices at 10am,” said Chalong Mayor Samran Jindapon.

“A mass prayer will begin at 7pm each day,” he said.

The abbot’s body was moved to the crematory at 7am on Wednesday and mass prayers started at 7pm that night, Mayor Samran said.

“The final day of the service will start with alms offerings to monks and novices at 10am, followed by a mass prayer from 2pm until the cremation at 5pm,” he stated.

The royal flame will arrive at 4pm.

“The cremation will be led by the Southern Region Monk Dean Phra Prom Jariyaporn, the dean of Taphang Surin Temple in Trang,” Mr Samran explained

Phra Ajarn Lim was ordained at Wat Chalong at 1pm on July 5, 1962, and given the name “Uttamuyano”, meaning “a man of deep wisdom”.

He attained the position of Abbot of Wat Chalong in 1989.

In addition to the spiritual guidance he provided, Phra Ajarn Lim leaves behind a legacy of monuments at the temple, including the humbling “Phra Mahathat Chedi Phra Jom Thai Baramee Prakat”, also called “Chedi Wat Chalong”.