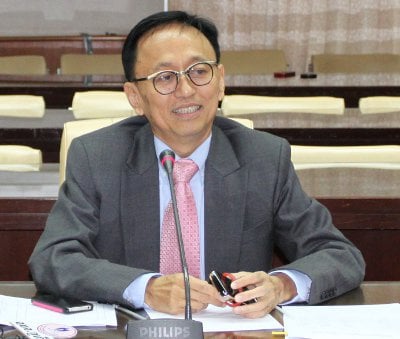 PHUKET: Paiboon Upatising, the president of the Phuket Provincial Administrative Organization (PPAO), today replied personally by email to the Phuket Gazette to deny rumors that he has last stage cancer.

“Don’t listen to all the rumors. I do not have final stage cancer, and thank you to everybody for your concern,” he wrote.

“That’s when I found out that I had a blocked intestine. My doctor recommended that I undergo surgery to have the blocked intestine removed, which I did. Today [September 25], I returned to Bangkok to have my dressing changed and to clean the incision wound,” he explained.

“I can return to work as normal. I was even in Phuket last week to chair a meeting about how we will spend the 2012-2013 PPAO budget, but my doctor has advised me to rest for six months, so I have assigned a PPAO vice president to temporarily take over my presidential duties for six months,” he said.

“I have no problem working, but the doctor said that I have to be very careful for the next six months. I have to rest and conserve my energy, so I will have to defer attending any social events until I have fully recovered,” Mr Paiboon added.

Dubbed Phuket’s “Pink Panther” for his use of pink to brand his public projects and his ability to turn up nearly everywhere, Mr Paiboon laid out his plans for the coming year.

“On October 3, I will be back in Phuket to chair my first PPAO meeting since the PPAO council election results were approved by the Election Commission in Bangkok.

“This year we plan to continue our parks improvement campaign so people can have a place to exercise. We will add more ‘green space’ to communities and provide people more space to play sport.

“Since the success of the new football field opposite Kathu Municipality, we will open another football field at Surin Beach, and after that another one in Thalang Town, but this one with a synthetic surface.

“We will also push many more projects, including projects to support tourism and environment conservation and public health care,” he added.

As for his medical condition, he added, “This condition is recurring through my family. My mother, my sister and uncle have all suffered the same thing. They all underwent surgery to correct it and now, some 30 years later, they are all happily still alive,” he said.