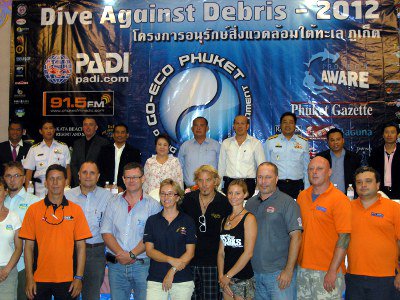 PHUKET: Qualifiers keep dropping with Go-Eco Phuket as the environmental group prepares for its official launch on September 30 with the biggest reef cleanup of any kind in the world.

“On September 30, the eyes of the world will be attracted to Phuket,” Tony Andrews, Thailand’s West coast PADI Regional Manager and Project AWARE Ambassador, said at a press conference with Phuket government officials at Kata Beach Resort today.

Of those participants, more than 280 are divers prepared to tackle the underwater debris, while the rest have volunteered to either help as snorkelers or with beach cleanups on Koh Racha Noi.

“The government officials were interested as soon as we met them. They thought it was a great idea and were proud of the dive companies and community,” Narong Chaimo, who acted as liaison between Thai officials and the Go-Eco Phuket group, told the Phuket Gazette today

More than 12 government offices and departments have pledged support for the project, from Chalong Municipality providing waste management for all the debris from the pier to the Royal Thai Navy sending three warships to maintain a perimeter to protect divers from speedboats that frequent the islands.

“We are pleased to help by disposing of the rubbish from the pier,” Chalong Mayor Samran Jindaphol said.

Once the rubbish is brought up from the reef it will be sorted into categories, such as fishing nets, plastics and so on, so it can be accurately documented, explained Mr Andrews.

“Go-Eco Phuket’s goal is to safely remove the debris from the reefs and beaches of Phuket and other surrounding islands,” Mr Andrews said.

The long-term goal of the event is to mobilize divers from around to the world to the return the surrounding reefs to a clean, healthy state.

“We had a strong dream of making the reefs of Phuket and the surrounding islands clean, pristine and sustainable, and making sure they belong in the top diving destinations in Thailand and the world,” Mr Andrews said.

Vice Admiral Taratorn Kajitsuwan, Commander of the Navy Third Area Command at their base at Cape Panwa, pointed out that when Prime Minister Yingluck Shinawatra previously visited the island, she had made it clear that eco-tourism was a must for Phuket.

“One of my priorities is to help [support eco-tourism efforts], and this project goes hand in hand with PM Yingluck’s vision of improving tourism and our country,” he said.

“Everyone is glad that Thais and foreigners have so much interest in the local environment,” he added.

During the meeting, a spokesperson for the Phuket Marine Biological Center highlighted to government officials the problem of “ghost fishing”.

Ghost fishing happens when nets become snagged on corals and are left behind by fishermen, but continue to catch and kill marine animals, he explained.

“These nets effect the entire development of reef system,” he said.

Noting that the issue of marine debris was a global concern, he said, “We hope we can show the world that Phuket can do it [cleanup the coral reefs], so it can be done everywhere else, too.”

The meeting also provided a forum for officials concerned about the current conditions of the marine ecosystem around Phuket.

“We will try to instigate a system to regulate and prevent boats from dumping rubbish,” a spokesperson for the Marine Department office in Phuket offered.

“We will always support local events like this… should there be any other ideas for eco-tourism, the Kata Group would be interested in helping,” he said.

“We can show the world that Phuket is on the map for diving,” Mr Andrews said.

“But it’s really about what happens after September 30,” Mr Andrews added.

On September 30, registration for the event will start at 7:30am at the new marina building on Chalong Pier.

At 8am, Governor Tri Augkaradacha, in his last day in office as Phuket Governor, along with other high-ranking officials will formally launch Go-Eco Phuket’s inaugural event.

An after party for participants will be held at Kan-Eang 2 at 6pm. A Thai-style buffet will start at 6:30pm and the raffle for a variety of dive goods and other contributions will start at 7pm.

RNR Eco Adventures and Dive Resort is sponsoring the night’s entertainment by bringing together Legend Recording Studio’s Dark Fiber and Legends of Siam, as well as the Rocking Angels band and DJ Tank, with a special performance by Ricky Zen.

Drinks will be provided by Molly Malones, Phuket Beer and Chang Beer.

The event will run to 11pm.

The cleanup is sponsored by the Phuket Gazette and will be covered on national television (UBC/True Visions, channel 99) by the Gazette’s new show “Phuket Today”. The show airs six times per week. For the schedule, see October’s True Visions programming guide.

Businesses interested in joining the Gazette as a sponsor of “Dive Against Debris” are invited to contact any local PADI dive center, or Tony Andrews, Regional Manager of PADI, by email at tony.andrews@padi.com.au