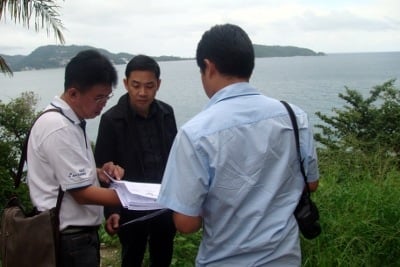 The named landowner, for two plots along the coastal road north of Patong, denied any knowledge of owning the land under investigation and expressed no intention of even wanting to claim ownership of the plots in question.

The scenario yesterday introduced the possibility of corrupt government officials illegally using one land title in order to create a new title for land elsewhere, without the owner of the original legal plot knowing, so that the second plot could be acquired and sold later.

Col Dusadee explained that his office had discovered a mysterious application for the Phuket Land Office to issue a “new” Sor Kor 1 title for land in Patong to replace an “old and damaged” Sor Kor 1 title.

“We also found that the land [at the north end of Kalim] is located in the 180-rai Kuan Hin wildlife preserve, which was created in 1937. By law, no land in this whole area can be owned by anyone for any private or commercial use,” said Col Dusadee.

However, Weerachai Thonghom, 53, denied any knowledge of his family owning the land.

Mr Weerachai presented himself as the representative of Gaew Thonghom, who is the named landowner on the Sor Kor 1 title in question.

Col Dusadee joined Mr Weerachai in inspecting another plot further north along the same coastal road for which the same apparent “ghosting” of land titles had been used.

“The Sor Kor 1 for a four-rai plot of land [elsewhere] was used as the basis for issuing a Sor Kor 1 title for a plot covering 25 rai here at Baan Nakalay,” Col Dusadee explained.

Again, Mr Weerachai denied any knowledge of his family ever owning 25 rai at Baan Nakalay.

“I have already asked the Phuket governor to investigate this,” said Col Dusadaee.

“I have also issued a letter requesting that the Kamala OrBorTor [Tambon Administration Organization] check it out,” he added.

Col Dusadee also inspected a nearby plot of 25 rai of seafront land, technically located in the Kamala Hills forest preserve.

“The last time this area was checked was back in 1976, and no one was using the land here for anything at that time. The area is still full of trees today, but now someone has a Nor Sor 3 Gor title for this plot of land,” Col Dusadee explained.

“The Department of Special Investigation [DSI] investigated this area once, but no one did anything about it and the investigation went quiet.

“So now we have come back to check again to see how the Nor Sor 3 Gor was issued since it is not legal. This parcel of land cannot be owned by anyone,” he said.

The fourth plot inspected, near the prestigious Loch Palm golf course, was the subject of an anonymous complaint filed via the PACC corruption hotline 1206, explained Col Dusadee.

The complainant alleged that there had been an attempt to issue a Chanote land title document for the land on the basis of a Nor Sor 3 Gor title issued for the plot.

“I believe the Nor Sor 3 Gor document was not legally issued since the Forest Department has confirmed that this land is in a protected forest area. I will investigate this further,” Col Dusadee explained.

He added that there were many cases of land titles being illegally issued in Phuket and that most of those cases involved government officials.

“The PACC has issued a written warning to all government offices in Phuket to check carefully before issuing any land ownership documents. Any government officials found to be involved in improperly issuing land titles will be investigated by the PACC,” Col Dusadee warned.

“Even though I will no longer be the secretary-general, I believe the PACC will continue investigating such cases,” he added.

The Cabinet on September 4 ordered Col Dusadee to take up the position of deputy permanent secretary at the Ministry of Justice, with effect October 1.

The move has sparked controversy as Col Dusadee had been investigating possible corruption related to public land encroachment in Phuket, evasion of tax on imported luxury cars and disaster relief schemes.