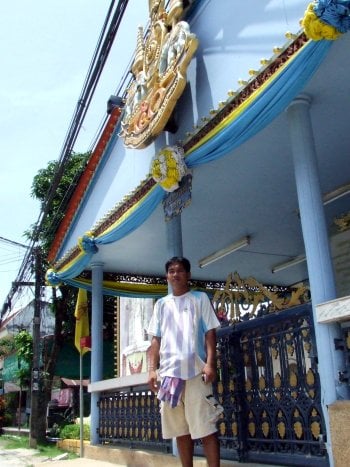 PHUKET: More than 100 villagers from Baan Mon community in Patong descended on Provincial Hall last week to hand a formal letter of complaint to the governor against the proposed Patong Tunnel project.

The villagers vowed to fight any government effort to expropriate land needed for the project.

Current scheduled rates for expropriation set by the Land Department would never cover the high costs of finding new homes in Patong, they said.

They also called for another public hearing on the project now that a Korean firm has expressed interest in funding construction.

“It’s good when people stand up to voice their opinions. Any project must have minimal negative impact on the people. However, the tunnel project still has many steps to go through,” said Governor Wichai, whose tenure in office will come to an end this month.

This latest protest follows a public hearing at Phuket Graceland Resort on April 27, when the project study team announced its recommendation to build two 1.17-kilometer tunnels with elevated roads at both ends. It was one of six route options considered.

Under the plan, west-bound traffic would approach Patong Hill from Kathu, diverting near the Go Kart Speedway on Phra Barami Road (Route 4029) onto an elevated road leading up to the tunnel.

Traffic would emerge on the Patong side onto a 204-meter-long elevated road passing over Phisit Gorani Road in Baan Mon and connecting to Phang Muang Sai Kor Road, near the APK apartment complex.

Witsanu Yidsua, village headman of the 3,000-member community, said about 30 of the community’s 380 families would lose their homes from expropriation if the project goes forward.

“We only found out that our village would be affected after it was announced that this plan had been chosen,” said Mr Witsanu.

Fellow Baan Mon representative Kittisak Sa-nguanporn said, “Baan Mon is the only village in Patong that still keeps its village lifestyle. Everywhere else is jam-packed with apartment blocks and hotels.”

The previous town council rejected the tunnel project in 2008, but the current board continues to push for it, he said.

“This option was chosen because it costs less, but they didn’t think about the cost to our village. It’s not just 30 houses having to move, other households will also be affected during the construction,” he said.

“The project will affect the village’s water supply from the dam in the forest in the hills above, which was built after HM The King visited.”

Baan Mon is home to the Ratchapathanusorn (the National Memorial of His Majesty The King’s Footprint) on Phisit Gorani Road. The site commemorates HM The King’s visit to Patong on March 11, 1959.

Mr Witsanu said the monument will undergo a complete rebuild for next year’s annual celebration marking the event.

“The design is already being created by renowned artist Chalermchai Kositpipat and Patong Municipality will provide the budget of more than 10 million baht to build it,” he said.