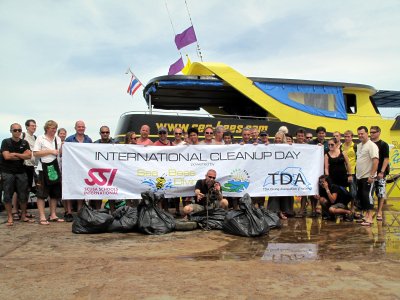 PHUKET: Fully-gloved and nets in hand, volunteer divers helped remove about 100 kilograms of rubbish from the sea as part of International Coastal Cleanup Day on September 25.

Volunteers taking part met at Chalong Pier on Saturday morning for the voyage to waters around Koh Mai Thon, a one-hour boat trip from Phuket.

After being briefed on the dive site and procedures for safely cleaning the reef, divers took to the water, where they had no problem finding work to do.

“Once the cleanup began, there was a steady stream of divers returning to the surface with full loads – almost every five minutes another net-bag appeared filled with beverage cans, nets, plastic bottles, shoes, and so on,” Sea Bees Public Relations Manager Frank Mueller told the Gazette.

On the way back to Phuket, every participant received a Certificate of Recognition for their involvement in International Coastal Cleanup Day, he said.

After arriving back at the pier, volunteers were treated to a drink at the Anchor Inn in Chalong. “All participants could clearly see the importance of the cleanup and were very satisfied with the good work done on the day.

“All in all the event was a great success, so thank you again to all participants – the environment will thank you for it on your next dive,” Mr Mueller said.

Other activities marking the day were a two-day cleanup at Koh Racha Yai organized by ScubaCat and a beach cleanup at Nai Yang Beach organized by the Indigo Pearl Resort as part of an ‘eco-tourism’ discount package.