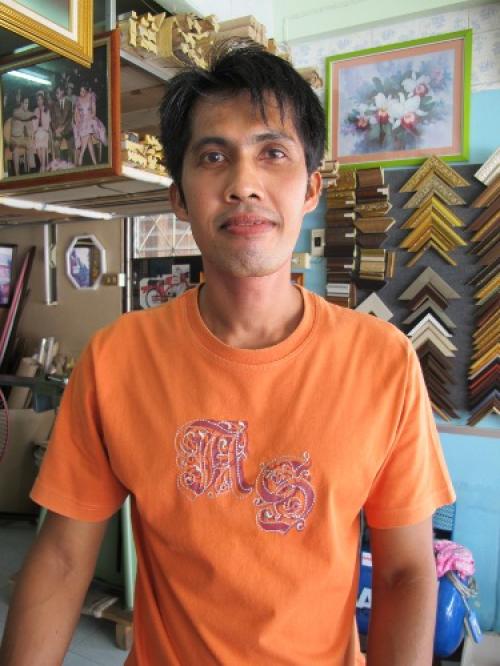 PHUKET: While the debate rages on over whether or not the Sydictive Element New Year Phuket beach party will move to Patong – despite already being granted permission to be held at Surin Beach – one local resident has spoken out about how the party would affect the beachfront community, for better and for worse.

Somchai Prasongphon, 42, was born and raised in Cherng Talay. He owns a frame-making shop in the area called “Ice Dear Frame”, and his house is only 200 meters from Surin Beach, where the massive Sydictive Element New Year beach party has been granted permission to be held.

“I heard about the plan to hold a big New Year party on Surin Beach about a month ago, but since then I have not heard anything about it. I personally don’t have any issues with the party, as long as it doesn’t cause me or other people who live in the area any trouble,” he told the Phuket Gazette.

“I am really not worried about the music or sounds of the party disturbing me, because I understand that New Year’s Eve is a special occasion and a time for celebration; this is something that everyone, everywhere celebrates. It is actually advantageous that the organizers chose to have the party in my community, as it will help promote Surin Beach and Phuket to the world.

“Surin Beach, unlike Patong Beach and Kata Beach, is not crowded. It is a peaceful, quiet place. Having the New Year’s party here, especially with world-class artists, DJs and celebrities will color up the beach and make the atmosphere more lively,” Mr Somchai said.

“I like the feeling that I get when I see tourists walking around and enjoying the area. I am always proud to know that they chose to come to our community,” he added.

However, Mr Somchai cautioned that the party organizers needed to make sure the event did not cause any trouble or negatively affect those living in the area.

“The beach is public, so whatever the organizers do, they should be concerned about the impact they might have on those who live and work in the area. If the party could be established on only one side of the beach, so the other side could be used by tourists and locals wanting to relax, play in the sand and swim, that would be excellent,” he suggested.

Beach vendors should also be allowed to continue their business as usual, Mr Somchai urged.

“In general, the event organizers should not prevent anyone wanting to use the beach from doing so.

The best solution is to find a balance. The party could go on, while beach vendors and those not wanting to join the party are still allowed to take part in general beach activities,” he said.

“I truly am open to new things such as this big beach party, but only if it does not ruin the lifestyle or culture of local people,” Mr Somchai added.