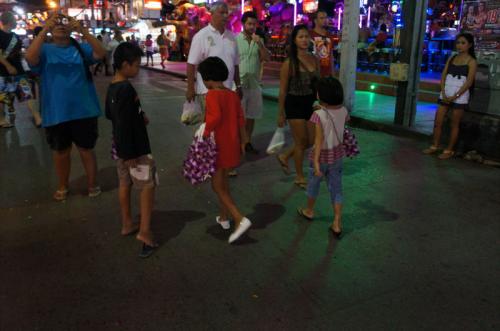 PHUKET: A 12-year-old girl fleeing her captors to the safety of officials on Soi Bangla last week, has raised the ugly specter of Phuket becoming a prime human-trafficking and child-exploitation destination, according an international children’s rights agency.

The girl, nicknamed “Aoi” to protect her identity, ran up to Patong Deputy Mayor Chairat Sukban and about 10 other officers on night patrol on December 11, saying that she and some of her friends had been taken away from their parents in Cambodia under the pretense that they would be trained as nannies for high-society families in Patong.

“After we got here, the men forced us to steal tourists’ bags. We had to steal one or two times a night – they were always watching us, and if we didn’t steal something, we weren’t allowed to eat,” Aoi said.

“They said they would attack our parents back home if we did not do what they said,” she explained.

“The men said anytime we see Mr Chairat we must run away… This time I decided to run to you asking for help. I want to go home. I miss my parents.”

Aoi had been arrested on Soi Bangla many times. However, every time she was arrested, a Vietnamese man, claiming to be her father, would show up and take her away, explained Mr Chairat.

“Many Vietnamese and Cambodians are involved in the alien-beggar scams, and we are sure that the group of men that were holding Aoi [captive] are Vietnamese,” he added.

Patong Police Superintendent Chiraphat Pochanaphan told the Gazette that his officers were searching for Aoi’s imposter father. However, Col Chiraphat gave no name or description of the man.

“We are now searching for the man who claimed to be her father… Patong Police are coordinating with Social Development and Welfare officers in the search for the man,” he said.

“At this stage, this is the only information I can reveal,” he added.

An officer at the Social Development and Welfare Phuket office told the Gazette that Aoi was now safe and under the department’s care and protection program.

“Officers are now working on sending her back home to Cambodia. I don’t know how long this will take. We can only take good care of her and coordinate with the relevant authorities on getting her home,” she said.

However, the welfare officer also said she could not comment on what action was being undertaken to protect other children at risk on the streets of Patong.

The silence on the issue has prompted at least one children’s rights organization to speak out, warning that Aoi’s flight to safety might be the tip of the iceberg once the Asean Economic Community (AEC) comes into effect in 2015 with its expanded allowances for worker migration.

“I was not previously aware of this particular story [regarding Aoi]. However, children selling flowers are found at tourist destinations all over Thailand,” Nutthawut Buaprathum, a lawyer at the Center for the Protection of Children’s Rights Foundation (CPCRF), said.

“I personally do not care what the police and local Social Development and Welfare officers say they can or cannot reveal about the case. What I want to know is what are they actually doing about it.

“I wonder if the police are taking serious action on investigating the case further, or whether they just let the children go after the ‘parents’ show up,” he added.

Mr Nutthawut expressed grave concern about the impact the AEC will have on Phuket. “The Asean Economic Community is coming. I wonder how the government will handle this issue. Phuket is a top tourist destination that already attracts child-exploitation gangs that force children to work as beggars and street peddlers.

“I can see that government officers would like to pretend that Phuket is not a human-trafficking destination because it will affect tourism and might even prompt international pressure from other countries. But if the government does not take serious action on this, there will be a lot more of these people coming in the next three years – and the problem will only get worse,” he said.

Mr Nutthawut explained that CFRE is part of the international network Children on the Move. “This issue is our top priority for the next three years. What we can foresee, with the arrival of the AEC, is the chance for children to exchange education, knowledge and culture. However, once it is easy to come and go among Asean member nations, there will likely be more people attempting to take advantage of this,” he explained.

Deputy Mayor Chairat, who is often seen personally patrolling the streets of Patong, told the Gazette that the role of municipality officers in taking action against such gangs of street peddlers was limited.

“This issue is not only about children selling flowers on the street, but involves human trafficking. We have passed news of this to the police, Social Development and Welfare officers and senior officers at Provincial Hall who now know about this as well,” Mayor Chairat said.

“However, all we can do with children or other people who are caught annoying tourists is charge them with being a public nuisance and fine them up to 2,000 baht each time.

“If we catch a child unaccompanied on the streets and we take him or her in, there is nothing we can do if the child tells us that the person who comes to claim them is their parent, uncle, aunt or other form of guardian,” he said.

“Arresting the people who run these gangs is under the police’s responsibility. We can only coordinate with and support the police at their request,” Mr Chairat added.