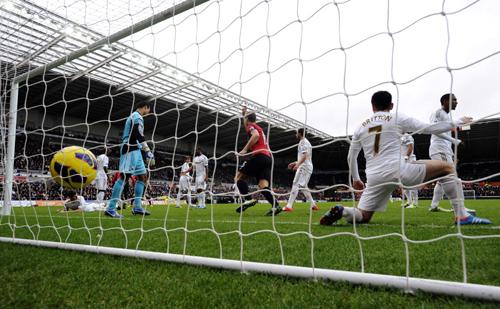 Chelsea striker Fernando Torres began the goal glut after three minutes at Stamford Bridge and David Luiz and Branislav Ivanovic made it 3-0 at the break.

It took Chelsea’s goal tally to 13 in two games after they thrashed Championship (second division) side Leeds United 5-1 to reach the League Cup semi-finals in midweek.

United led at Swansea through Patrice Evra after 16 minutes but the league’s top scorer Michu netted his 13th goal of the campaign for the hosts, moving the Spaniard one ahead of Robin Van Persie, to level just before the half-hour.

United, who hit the woodwork twice in the second half through Van Persie and Michael Carrick, hold a four-point advantage over Manchester City, who beat Reading 1-0 on Saturday, heading into a busy holiday programme.

The leaders have 43 points from 18 games, followed by City on 39. Chelsea moved back up to third place with 32.

Ferguson incensed
United manager Alex Ferguson was hardly in festive mood after his side’s trip to Wales, rueing two points that got away, claiming Van Persie “could have been killed” by Swansea captain Ashley Williams and criticising referee Michael Oliver.

“We absolutely battered them and we are very unlucky,” Ferguson told Sky Sports. “It should have been a six-point gap (over City) today and that is the disappointment.”

Ferguson was incensed when a prone Van Persie was struck in the head from point-blank range by a clearance from Williams with the whistle having been blown for a foul on the Dutchman.

The Scot said it was a “deliberate act” and called for Williams, booked along with Van Persie, who escaped injury, in the melee that followed, to receive a long ban.

“Robin van Persie is lucky to be alive. It was a disgraceful act from their player today and he should be banned by the FA. Robin could have had a broken neck,” said a seething Ferguson.

Swansea welcomed back Michel Vorm after the goalkeeper missed 10 games with a groin injury and the Dutchman was soon called into action to beat away a Wayne Rooney drive before he quickly followed up to deny Ashley Young.

However, from the resulting corner Evra met Van Persie’s delivery with a glancing header that eluded Leon Britton who was stationed on the goal-line.

United have scored 10 goals from corners in the Premier League this season, more than any other side.

Wayne Routledge created the equaliser, his well-timed pass playing in Jonathan de Guzman, and when David de Gea failed to hold his well-struck low shot, Michu was on hand to follow up.

United had the better of the second-half although the hosts, again displaying the attractive attacking verve that has won Michael Laudrup’s side many admirers this season, were also a threat until tiring in the closing stages.

Van Persie’s mishit volley struck the crossbar before Vorm came to Swansea’s rescue when he tipped Carrick’s glancing header on to the woodwork.

Young was then denied by a brave block as United pushed hard for a victory that eluded them.