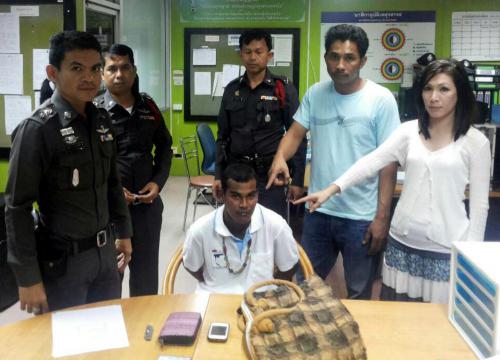 PHUKET: A Kalim tuk-tuk driver rushed to the aid of a woman who called for help yesterday and managed to apprehend the man who had just snatched her bag.

Yongyuth Dhamkong, 42, was driving along the Kalim beachfront road at about 2am when he heard Nongsarang Sakyen, 33, calling for help.

“When I drove past the victim, I heard her shout for help,” he said. “I saw her pointing to a man riding a motorcycle about 100 meters ahead of me.”

“I caught up with him and cut in front of his bike with my tuk-tuk. With the help of some other people, I managed to capture him,” he said.

Ms Nongsarang works in Patong and had gone to Kalim to relax with some friends after work.

“While I was riding my motorbike along Kalim beach road, the snatcher rode his motorbike beside me. He snatched my bag and rode away,” Ms Nongsarang told police.

Inside the bag were a Samsung cellphone and 5,100 baht cash, she said.