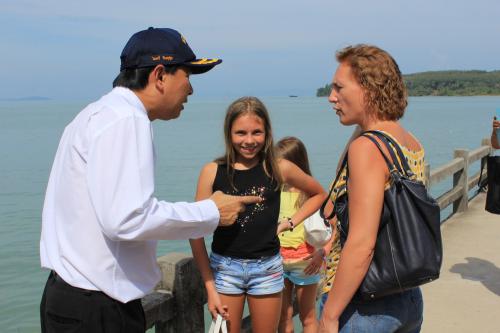 The tour was part of a current blitz on marine safety, which was launched following a heavily overloaded ferry from Pattaya capsizing off Koh Lan, injuring many passengers and causing the deaths of six people (story here).

“Phuket has a lot of boats that take tourists from Phuket to other islands along the Andaman coast. That is why safety must come first – to prevent accidents,” Governor Maitri explained.

Officials from the Marine Office were called on to ensure ferry boat registrations and the licenses of their captains and engineering crews had not expired.

“I have also asked officers to ensure that boats are not overloaded and that each passenger vessel has enough life vests for every person on board,” Governor Maitri said.

“I have urged boat operators to make sure that every person puts on a life jacket before the boat leaves the pier,” he added.

The governor also called on officials to enforce the 5-knot speed limit on all vessels arriving or departing piers.

“These safety rules are already Marine Department regulations. The authorities just have to enforce them for the safety of the people,” he added.