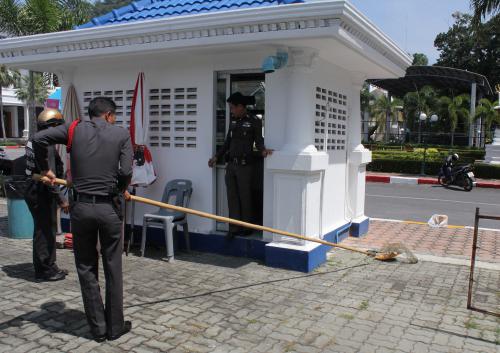 PHUKET: A cardboard box found at the entrance to Satree Phuket School yesterday morning raised fears among security guards that the package might contain explosives.

Police were called to the scene, near the busy Tungka Intersection in Phuket Town (map here), just before midday.

“When we arrived, we found a box and an envelope, in a plastic bag from a 7-Eleven store, on the ground beside the guardhouse,” said Lt Col Kritsana Jannit of the Phuket City Police.

“We cleared the area just in case it was a bomb,” he added.

Officers used a long bamboo stick with a fishing net fixed to the end of it to carefully recover the envelope and to extract the box from the plastic bag.

After much prodding, officers took the chance to approach the package and open it manually using a box cutter.

“The box contained an assortment of beauty and personal hygiene products, including contact lenses and bottles of shampoo,” Col Kritsana explained.

The owner of the package may yet have the missing items returned.

“We brought all the products and the box to the police station so we the owner can come and collect them. His name and address were on the box,” Col Kritsana confirmed.