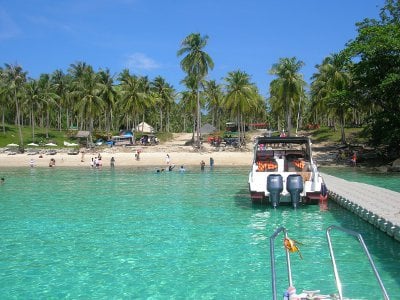 PHUKET: The Department of Marine and Coastal Resources (DMCR) has been forced to start taking steps to redress the growing concerns voiced in Phuket about the environmental destruction of Koh Racha Yai by negligent tour operators and tourism business owners.

The news comes after a leading figure in local environmental conservation blasted greedy tourism operators and the lax enforcement of environmental protection laws at a meeting in Rawai yesterday.

“To save the environment we need action now… It’s time to use the rules to enforce [environmental protection] and we need to make private businesses understand [their responsibilities],” said Suta Prateep Na Thalang.

Mr Suta, president of the Community Network of Chalong Bay and a member of the marine natural resources management team on Koh Racha, accused local resort owners of cutting down natural forests and not adhering to environmental protection regulations.

Specifically, he accused developers of not abiding by the Building Control Act BE 2522 and the environmental protection and conservation measures issued under Ministry and Science Technology BE 2535 (1992).

DMCR officer Nisa Permsirivanich said that the trash disposal on Koh Racha was not being managed well, with landfills piling up and discarded trash found strewn across the island.

“People do not cooperate with each other. For example, the person who disposed of used bottles in the past by grinding them down for recycling died more than a year ago, but nobody has volunteered to take on this responsibility. So the machine is just left sitting idle,” Ms Nisa explained.

To counter the spread of trash and to raise awareness of keeping the island clean, the DMCR will conduct beach and reef cleanups on June 1 and 2.

“Both private operators and island residents will be asked to take part. The idea is to foster relations among local people so that they work together on important operations, such as trash management,” she said.

Phuket Vice Governor Sommai Prijasilpa ordered a report on the situation to be filed with the Provincial Office this week and a two month deadline be set for environmental protection measures to be put in place on Koh Racha.

Vice Governor Sommai also called for another meeting to be held to address these issues. That meeting is to include representatives of the government and the private organizations involved. “Especially those on Koh Racha, such as hotels, business operators and sea gypsies,” she said.