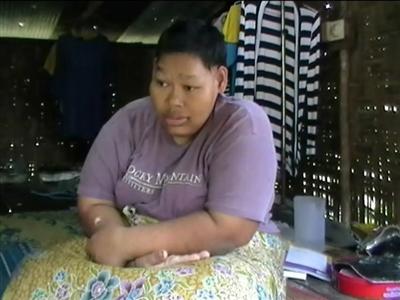 PHUKET: The elderly mother of a morbidly obese woman in Krabi province is seeking assistance to get her daughter the medical help and living assistance they need to survive.

Wanphen Pimsri, 32, started having serious medical problems as a teen. At age 18, she underwent brain surgery for a hormonal imbalance at Songklanagarind Hospital in Haad Yai, the top government medical facility in the region, after which time she continued to gain weight.

Ms Wanphen, now 200 kilograms, lives in a dilapidated shack in a rubber plantation in Klong Tom Tai subdistrict with her 70-year-old mother Phun, her only caregiver.

The shack measures under eight square meters in area. It has a corrugated zinc panel roof, but no front wall to keep out the strong monsoon wind gusts that have recently caused blackouts and property damage in Klong Tom District.

Rescue worker Somyos Yem-oad, who visited the family, told the Gazette that Ms Wanphen needs four people to assist her in standing up.

Ms Phun told Mr Somyot she can no longer work because of her age. As she receives just 500 baht a month in government aid for the elderly, she is unable to afford treatment even under the government’s universal healthcare program. Doctors have already told the family there is no more they can do to address the hormonal imbalance that is causing the weight problem.

The land on which the home is located is not their own and the hut has no toilet, she added.

Kind neighbors sometimes provide the pair with offerings of food, but what she needs more than anything else is a house with a toilet and financial assistance from any organization willing to provide it.

Ms Phun said she is desperate for assistance because after 14 years she can no longer look after her daughter on her own.