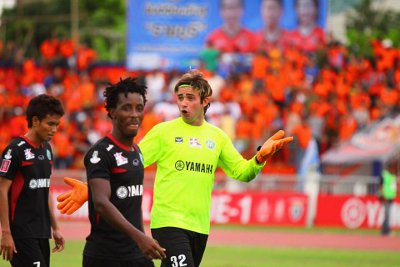 PHUKET: Fans of FC Phuket, outraged over a red card given to keeper Alonso Jose Carvalho Da Silva in Sunday’s 3-0 loss on the road at Ratchaburi, got a small measure of vindication yesterday when the Thai Premier League (TPL) review board agreed that the Brazilian’s diving kick save wasn’t intended to harm the attacking player and that remedial action should be taken.

FC Phuket fans who travelled to watch the game, and many more who watched on television in Phuket, were inspired by the 16th-place Southern Sea Dragon’s first-half performance on the road to league leaders Ratchaburi Mitrphol FC “Dragons”.

Thanks in large part to some outstanding saves by Da Silva, the two sides went into the locker room at the end of the first half tied 0-0. But seven minutes into play in the second half the lanky Brazilian raced out of the net and managed to kick away a ball before it reached the feet of a streaking, undefended Ratchaburi attacker just outside the penalty area.

Cheers for the “supersave” quickly turned to fury when referee Surachai Gulap red-carded Da Silva, who protested in disbelief before finally leaving the field.

As all on-field calls are irreversible in football, Phuket was left with no choice but to continue the match a man down with reserve keeper Worapot Sabaijit in goal.

The first two goals came from Chutipon Tongtae on 65 and 89 minutes. The final nail in Phuket’s coffin was hammered in by Chakrit Rawanprakhon in the 5th minute of added time.

After their strong performance in the first half and with Da Silva missing the last match against Air Force, the FC Phuket faithful were confident that a win at Ratchaburi would turn the corner on the season.

The team recently got additional funding by the Kata Group of hotels and their new president Pamuke Atchirayachai boldly predicted that the team would rise up to finish out the season in the top seven of the 18-team bracket.

Thus, the controversial ejection of Phuket’s “secret weapon” and highest-paid player was not well digested by the fans, especially the 50 or so diehards who made the long bus ride north for the fixture.

Back in Phuket Town, dozens of fans who packed the Nok Sanarm sports bar across the street from Surakul Stadium to watch the match live complained loudly of “blatantly biased” officiating.

“Ratchaburi’s first five wins this season are credited to penalty kicks. Coincidence? Just look at their website. Their front page asserts ‘We will go to the Premiere League’. How can you guarantee [promotion] so early in the season?” asked a fan on the bar’s popular blogsite.

The sentiment about the result was not limited to fans. Phuket manager Ahsin Arammethapongsa also condemned the call.

“We strongly disagree with the call by Surachai Gulap. As soon as we review the tape and confirm that the call was uncalled for, we are going to make a formal complaint with the Thai Premier League.

“We know it won’t change the result, but a lot of money has gone into bringing [Thai] football up to standard and to have it all go to waste because of one man is unacceptable,” he was quoted as telling a SiamSport reporter after the match.

Yesterday, the TPL committee reviewed a tape of the play, agreeing that there was no intent by Da Silva to harm the Ratchaburi player, who predictably rolled in mock agony after their collision. The committee agreed to consider the case further and render a decision as to whether to reduce the red card to a yellow or annul it altogether.

The committee also accepted a letter of complaint against referee Surachai presented by FC Phuket representative Paitoon “Big Men” Chutimakkarakul, saying they would pass it on the the Football Association of Thailand ruling committee for review and possible punitive action.

The disappointing result did not have an impact on Phuket’s lowly ranking in relegation zone.

Still undefeated, Ratchaburi, who were promoted to Division One this season, maintain their stronghold on the league tables.

Phuket will break for a few weeks and resume play in a Toyota League Cup match in an away fixture with Division 2 upstarts Sa Kaeo FC on June 9.

After that they will travel to Chonburi province to take on the Royal Navy in a league match at the naval base in Sattahip on June 13.

After that, Phuket are the scheduled to return to the island for three consecutive home matches: