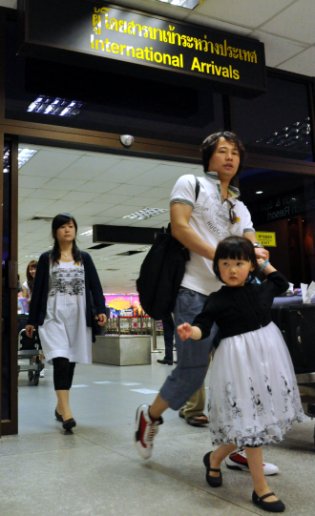 PHUKET: Thanks to rising tourist arrival figures overall, the Phuket economy has thus far not been too badly affected by the recent surge in the baht against major currencies.

However outbound tour operators nationwide expect the strong baht to cause a 13% increase in the number of Thais traveling abroad.

Charoen Wangananont, president of the Thai Travel Agents Association (TTAA) that monitors the outbound tourism industry, said yesterday that 5.3 million to 5.4 million Thais were expected to go abroad this year.

The figure is half a million more than last year and similar to the years before the political crisis. About 60% will be tourists and the rest will be students and businesspeople.

Last month about 70,000 Thais went abroad for vacations. The TTAA expects up to 100,000 Thai families to holiday abroad this month, as many families will go on trips during the current school break.

The exodus will continue in the festive month of December, it says.

About 80% will stay in Asian countries, particularly Singapore, China, Japan and South Korea. Some 20% will head to medium- and long-haul destinations including Australia, New Zealand and Europe.

This high season, demand on long-haul routes is up by 17% because of the favorable exchange rates.

The baht has risen to its highest level in 13 years, gaining more than 10% against the US dollar and the euro so far this year.

The growing outbound traffic will rub salt in the wounds of operators focusing on incoming tourists and local travelers, as this will exacerbate the predicament they have been facing since the political conflict erupted three years ago, Mr Charoen said.

Operators are waiting to see economic improvement and political stability restoring confidence before making decisions on long-term investment, he said.

So far, local operators have not been badly affected by the baht’s rise. In the past three months, Thailand witnessed an increase in tourists, especially from China and other Asian countries. This month, airlines from China and the Middle East such as Qatar Airways will add charter flights to Bangkok and Phuket.

The Qatar Airways service from Doha to Phuket via Kuala Lampur begins today.

Prakit Chinamourphong, president of the Thai Hotels Association, said Bangkok hotels were only half-full, with slight bookings for the high season as most tourists are worried about the security situation.

Only tourists from India seem unconcerned about the widely reported explosions in Bangkok, he said.

Phuket yachties to get ‘Data Center’