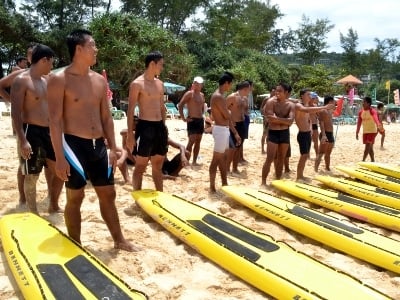 PHUKET: In a bid to save Phuket children from drowning, a new project by the Phuket Lifeguard Club, Laguna Phuket and Cherng Talay Municipality aims to teach students in Phuket’s Thalang District how to identify dangerous swimming conditions.

The students will even learn how to perform cardiopulmonary resuscitation (CPR).

Held over two school semesters, the project will be open to all students in Matthayom 1-3 (age 12-15) from seven schools in Thalang.

The half-day classes will be free of charge, with the first course comprising 22 classes starting from November 25 to February 18.

A second course will be held during the first semester of the 2012 academic year, though precise dates have yet to be set, said Niyom Tassaneetipagorn, Senior Assistant Vice President, Laguna Resorts & Hotels.

Some classes will be held on school days and others on weekends, he added.

During the training sessions student will be taught how to recognize the dangers around them while swimming, how to assist a swimmer in distress, how to escape a rip current and how to float to conserve energy, among other skills.

“Each class will have 35 to 70 students, with the training conducted at Laguna Beach, Cherng Talay Municipal Pool and at the Thanyapura sports complex,” said Mr Niyom.

According to statistics from the Ministry of Public Health, about 1,500 children drown in Thailand each year – an average of about four children a day, he said.

Although the drowning deaths of children in Phuket is falling – three deaths in 2008, four in 2007 and six in 2006 – the project aims to reduce the number of fatalities even further.

“We would like parents to be aware of this problem and we want children to learn survival skills for when they are in the water.

“There are 2,612 students who can take part in this project, regardless of whether or not they are able to swim. We expect 90 per cent of them to participate, but I would like them all to join the training,” Mr Niyom said.

“We will not be teaching students how to swim, just survival skills. For example, we will teach them how to identify which locations are safe to swim, what the different lifeguard beach flags mean, first aid and CPR, how to float safely after they have fallen into the water, and how they can best assist a person who is drowning,” he explained.

This year alone, Phuket has had more drowning deaths of children than the national average.

On June 6, a seven-year-old boy drowned while bathing beside his father’s fishing boat in an estuary in Mai Khao.

On April 22, a mother watched helplessly as her son drowned in a tin mine lagoon behind the family home north of Phuket Town. The boy was swimming across the lagoon when he developed a leg cramp.