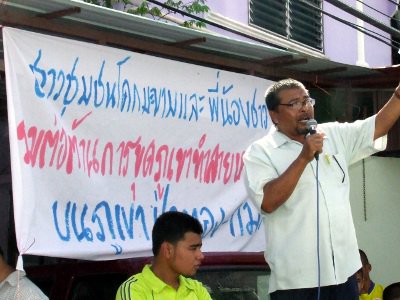 PHUKET: A protest staged by about 100 residents on Friday has resulted in the Phuket Provincial Office spearheading an investigation into construction on a steep hill in Patong.

The protest, held opposite the entrance to Phra Baramee Road Soi 4, came after the third mudslide hit the Kok Makham community since construction began at the site.

“Three times mud, sand and rocks have slid into our village. The last time was only about a week ago, but it was the worst. Mud blocked the drains and covered the streets, and the dirt left behind was over a meter high,” said protest leader and former community president Chatchapol Khamintong, 48.

“Even though Patong Municipality officers spent three days using a pump to remove the silt, a lot of dirt is still left [to be cleaned up],” he added.

The protest, which began at about 1:30pm, was called off at about 6pm after top Patong officials and the project developer arrived to hold talks.

The result of the negotiations, said Mr Chatchapol, was that a committee headed by the Phuket Provincial Office is to investigate the project immediately uphill from the Kok Makham residents.

Col Arayapan, District Chief Kanthee, Mr Chaianan and Mr Chatchapol were all named to be on the investigating committee, along with a variety of officers from Patong Municipality.

The project under investigation is the construction site of a statue of the Chinese goddess Guanyin, also known as the “Goddess of Mercy”.

“The project owner has now stopped construction. However, we are waiting to be informed by police when we and the committee will inspect the site and find a way to stop more dirt from sliding down and damaging our homes,” said Mr Chatchapol.

Somjit Kuru, 52, a Kok Makham resident and head of the local political party Patong Gao Na (“Patong Progress”), claimed that the developer had ignored previous orders to cease work at the site.

“The developer has excavated the ground and removed topsoil, which is dangerous as the project area is on a hill and covers at least 10 rai [16,000 square meters]. We are afraid that the problem will only get worse,” he said.

“Patong Municipality said they had already ordered them to stop and had reported the project to the police, but the construction still went on,” he added.

Mr Somjit called for Phuket Governor Tri Augkaradacha to
1) order the officials involved to stop the construction,
2) ban any further earthwork at the site,
3) order all equipment to be removed from the site, and
4) order for relevant officers to cooperate with the local authority to ensure the demands were met.

He also called for the developer to be held responsible for damage done to the streets, drains and homes.

Fellow protester Raksak Nuchet, 53, showed the Phuket Gazette a document apparently issued by Patong Municipality that identified Thepcharoen Property Company as the landowner of the site, with the company’s managing director Mr Chaianan named as the “project owner”.

The document also named Mr Chaianan as a representative of the Maha Bodhisattva Avalokitesvara (Guanyin) Foundation (Bud Jor Patong), and identified him as the person to be held responsible for any damages arising from completing the project.

Mr Chatchapol had a bright outlook on the outcome of the talks.

Mr Chaianan said he was willing to take any steps to solve the problem that the investigation committee advised, Mr Chatchapol said.