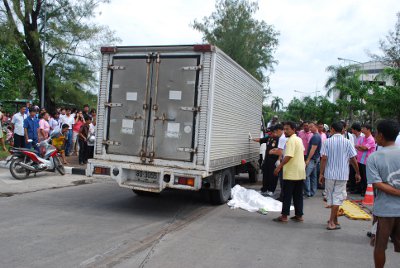 PHUKET: A 16-year-old Phuket student is dead and her classmate is in hospital after a six-wheeled truck collided with the motorcycle they were riding in Phuket Town today.

The accident happened at the junction from Phuket Road to Saphan Hin, near the Phuket Immigration Office, said Capt Thada.

“From our initial investigation, the ice truck was heading towards Saphan Hin when the accident happened. The truck dragged the rider for about 10 meters before coming to a stop. She was killed in the accident,” he said.

“The other girl, who survived the impact, was rushed to Vachira Phuket Hospital,” he added.

A teacher at Phuket Vocational College, which is about 250 meters from the scene of the accident, identified the deceased as Wiparat Ketkaew, 16, from Chumphon province.

“Wiparat was a first-year domestic science student. The girls had just finished morning class and assisting the school’s efforts in making meals to be sent to flood victims in Bangkok,” said the teacher.

“Wiparat called her mom just a few days ago and said she missed her, so her mom came to Phuket to stay with her. Last night was her first night staying with her daughter. Now her mum is in shock. She’s still at the hospital,” the teacher told the Phuket Gazette.

Capt Thada said the driver of the truck fled the scene, but was later arrested by police.

“We are continuing our investigation into what happened,” he said.

Meanwhile, a noodle vendor luckily escaped serious injury early this morning when a BMW sedan sideswiped his pickup truck, demolished his noodle stand and plowed into a power pole on Thepkrasatree Road early this morning.

Minutes later, about 2am, a young woman riding by crashed her motorbike at the same place, injuring herself in the process.

The driver of the BMW, 35-year-old Anan Idning, escaped serious injury, though his two injured passengers and the young woman were rushed to hospital.

“There have been at least 10 accidents in front of my shop due to the poor condition of the road,” said Yaowanit Sakseesuwan, owner of the Nueng Yan Yon tire shop.

“The accidents usually occur late at night when the street is empty and people often drive at high speed. Fortunately, there have been no deaths, but there are always small injuries and damage to the property.

“The owner of the noodle store has even been hit by a car before and that time his wife suffered serious injuries,” she added.

Ms Yaowanit said she has filed many complaints about the condition of the road, but said that so far no action has been taken to rectify the problem.

“I have filed many complaints with the Phuket Highways Office and asked them to inspect the road. I have even suggested to them to install a speed bump to slow down drivers. But all I have heard from them is that they don’t have enough budget to do it,” she said.