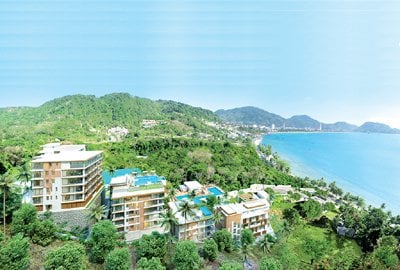 PHUKET: The Privilege Residences Patong is the sister project of successful luxury condominium project The Bay Cliff. After the first project sold out, Bay Cliff Development decided to launch another condominium development and take the definition of ‘luxury living’ to the next level.

“Since we launched The Privilege Residences Patong in October last year, we have sold about 30 per cent of our units. Although this figure may seem low compared with other condominium projects in Phuket, this is really quite a positive percentage relative to other sales in the high-end market,” said Mr Theeraphan Choprasertchok, Chairman of Bay Cliff Development.

“Our project has four different buildings: Two buildings are situated on elevated ground, while the other two are on the lower level and it is these that have sold the most,” Mr Theeraphan said.

“We have five types of unit: one, two and three-bedroom units, duplex, and penthouse. Prices start at six million and go up to 55mn baht,” he added.

We are scheduled to complete the project by early next year and the overall construction is nearly finalized.

“The project was started in October 2010 and is expected to be complete and ready to move into by May 2012,” said Mr Theeraphan.

“So far, construction is 70 percent complete. We now have some architecture and interior work to do. We will get the lower buildings completed first, since it is easier to work on the lower land,” he added.

Bay Cliff Development are targeting the foreign market. However, the economic crisis in Europe has made it difficult for investors to commit during the current instability.

“We had aimed to sell mostly to Europeans, since they were our main customers from our previous project. But now most of the buyers who have bought units at The Privilege are Thai. Even the penthouse of our project was sold to a Thai buyer.

Most of these Thais have bought the units as an investment, since we offer a six per cent net guaranteed rate-of-return on the buying price of all units,” said Mr Theeraphan.

The Bay Cliff Development has a contingency plan in order to solve this problem.

“We see very good potential in the Chinese and Australian markets and will now focus our strategies there,” he added.

“I believe the project’s location is correct. Timing is the only issue. We measured our success from our previous project. Everyone who bought from us previously said that this is a prime location. I know the economic crisis has affected our sales and currently this is a difficult time to market to Europeans,” said Mr Theeraphan.

Bay Cliff Development hopes that completion of the lower buildings will attract a lot more people to come and buy from them.

“Once the first two building are complete, more people will buy. There are a lot of customers from our previous project who will make purchases when they see the finished units, not just computer graphic images. We expect to sell another 20 per cent of our rooms before May 2012,” he added.

Completion of the building is not the only step to attract more people to buy as the company also intends to offer promotions to those who wish to purchase units.

“We may offer discounts, but we will still use high quality products for all our units. Since our condominiums are positioned in the luxury market, it is important we offer high end quality materials to our customers,” said Mr Theeraphan.

The Privilege Residences Patong also has a plan for unsold units once all the buildings have been completed.

“We plan to make part of our units available for monthly or yearly rental. We will target foreigners who work in Phuket, especially hotel executives. We won’t rent out a lot though, because we know all of our customers are willing to pay for their privacy. We will try to keep it that way,” said Mr Theeraphan.