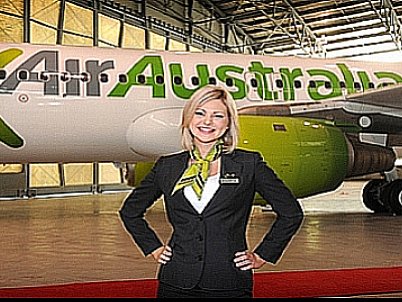 The reinvented LCC revealed the news earlier this month, showing off its new-look livery and flight attendant uniforms while emphasizing a commitment to bring Australia a fresh approach to affordable air travel.

Strategic Airlines, founded in 2009, has now retired its red, white and blue brand, former name and full service business model and replaced it with the wholly Australian-owned LCC.

It will now gradually transition its in-flight product, website, uniforms and airport facilities.

“Simplicity, value, operational integrity, genuine fares and service are our promise and all that we believe many Australian travelers want in order to get safely and enjoyably from A to B,” said CEO Michael James.

“Air Australia will avoid the massive product complexity of larger airlines as we do not want to be strapped down to charging our passengers ever higher fares to cover ever escalating costs,” he said.

“Many of our staff and advisers have extensive airline backgrounds and we have seen it all before. We understand the challenges of the industry and we understand the market.

“We also believe that there is mounting nostalgia in the consumer market and in the industry for an airline which offers genuine value and makes it readily possible for families and Australians of all ages to have the chance to fly,” he added.

The airline will continue to serve existing routes flown by Strategic Airlines out of its bases in Melbourne and Brisbane, and it will take over international leisure routes to/from Phuket, Bali and Honolulu.

Currently the LCC operates two weekly flights each from Phuket to Brisbane and Melbourne.

Air Australia’s all-Airbus fleet currently includes three A320 and an A330, with a second A330 arriving in December for the Honolulu service.

And it is in the process of doubling its pilot base and recruiting new flight attendants.

The last time the LCC made the news in Phuket was back in June when some of its Brisbane and Melbourne flights were grounded, canceled and/or delayed due to a series of aviation complications, leaving many passengers with a slightly extended, expenses-paid holiday in Phuket.