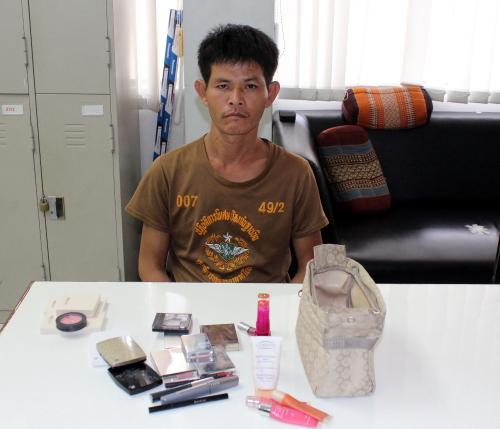 PHUKET: A Phuket security guard who turned to crime may have regretted his decision after the bag he stole turned out to contain nothing more than cosmetics, and CCTV images led police to his rented room the same day.

Rungnapa Bunnamee left her cosmetics bag in the basket of her motorbike when she stopped to shop at a 7-Eleven on Phuket City’s Songkla Road on Tuesday.

Ms Rungnapa reported the bag missing and police arrived soon afterwards to inspect CCTV imagery. Local residents were able to recognize Mr Surapol in the pictures and directed police to his rented room.

“After I stole the bag, I checked inside. There was nothing but cosmetics, so I just dumped it in someone else’s motorbike basket,” Mr Surapol said.