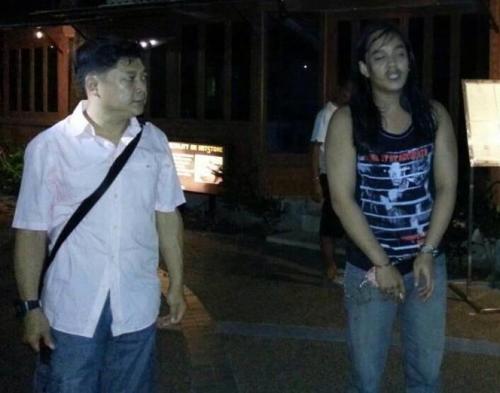 PHUKET: Three Thai musicians have been arrested for the murder of 51-year-old American tourist Bobby Ray Carter Jr and the assault of his 27-year-old son in Krabi early this morning.

According to one of the suspects, Ratikorn Romin, 27, from Phang Nga, a fight broke out between the three musicians and the Americans, who had joined them on-stage last night at Ao Nang’s Longhorn Saloon Bar, before the evening took a deadly turn.

The police were called to the scene at about 1:30am and were confronted with the aftermath of a night of drinking and live music gone horribly wrong.

“We rushed to the scene and found blood splattered in front of the bar. We were told that two injured men had been taken to Krabi Hospital before we arrived,” Krabi City Police officer Sanya Kaewnui explained.

“Mr Bobby Carter had been stabbed in the chest and his son, Adam, suffered bad head injuries. At the hospital, doctors tried to save Mr Carter’s life, but it was too late,” Lt Sanya said.

Adam Carter and the body of his father were transferred to Bangkok Hospital Phuket.

“We arrested three men at the bar: Ratikorn Romin, 27, from Phang Nga; Sathid Somsa, 40, from Bangkok; and Nopanan Yoddecha, 26, from Krabi.

“We also seized a homemade gun. They were all charged with assault and murder,” Lt Sanya said.

“Mr Sathid was also charged with possession of an illegal firearm. The three suspects are now in custody at the police station,” he added.

In his statement to police, Mr Ratikorn said, “We accept that we attacked them, but we didn’t intend to kill anyone. The father and son came to the pub and they joined us singing on the stage.

“Then we had an argument with them because they refused to stop singing when the time was up. The father knocked our tip-box to the floor. We left the stage and sat [outside] in front of the bar,” Mr Ratikorn said.

“After a while they came outside and started another argument with us. The father knocked me to the ground first, and I could not breathe because he was sitting on my chest.

“Then I spotted a sharp piece of metal nearby, so I grabbed it and stabbed him,” Mr Ratikorn said.