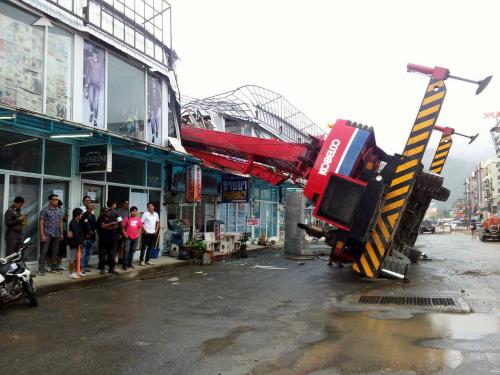 PHUKET: A crane manipulating a heavy section of concrete pipe toppled over in Phuket this afternoon, demolishing the second floor of two shops, and though no one was injured, the driver fled the scene.

“As the crane was lifting a section of pipe, land subsided under the crane arm, causing the operator to lose control,” said Sumpawat Wannasangkam of the Department of Disaster Prevention and Mitigation (DDPM) office at Patong Municipality.

“The arm collapsed onto the second floor of a tattoo studio and a pharmacy on Phang Muang Sai Kor Road at about 1:20pm,” he said.

“The crane operator fled the scene after the crash, but fortunately nobody was injured,” he added.

The cost of damage has yet to be estimated.