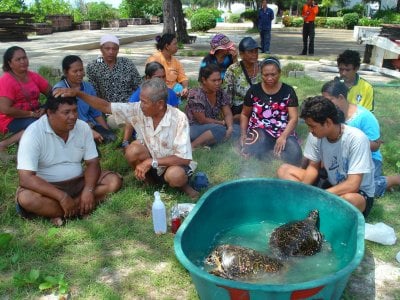 Many others fell seriously ill, but survived the meal.

The late-August ceremony, involving the release of three sea turtles, took place at a shrine to Balai Da Toe on Koh Mai Thon.

The release ceremony, presided over by sea gypsy shaman Hari Fongsaitan, began at about 10am.

About 20 villagers took part by bringing the remaining deadly meat for ritual cleansing.

Phuket Public Health Office workers reportedly said that while the poisonings of the sea gypsies were unprecedented in Phuket, they suspected toxins might have accumulated in the turtle’s flesh due to its diet, which includes sponges and jellyfish.

The sea gypsies taking part in the ritual think otherwise. They believe the deaths and illnesses may have stemmed from harming a turtle under the protection of Balai Da Toe.

To eradicate any lingering effects on those who ate the meat and survived, Shaman Hari blew incense smoke over the heads of survivors and pleaded to Balai Da Toe for forgiveness before releasing the three Hawksbills.

“We believe the turtle was caught in this area and thus under the spiritual protection of Balai Da Toe. From now on the sea gypsies in Rawai will refrain from eating the flesh of any sea turtle species,” said Shaman Hari.

This will come as good news to the local office of the Department of Marine and Coastal Resources (DMCR), which operates the Phuket Marine Biological Center on Cape Panwa.

The DMCR provided the three Hawksbill turtles used in the ceremony as well as the boat used to transport the group to the island.

Paitoon Panchaiphum, head of the regional DMCR office in Phuket, said the ceremony would lift the sea gypsies’ spirits.

The DMCR has an uneasy relationship with the community, whose poverty and traditional way of life often puts them in direct conflict with the marine conservation laws the agency is sworn to uphold.

Sea gypsies are often referred to as khon Thai mai (new Thais) in the Thai media.

As a people, they are slowly integrating into Thai society. Although an increasing number of the younger generation have little or no knowledge of the long-standing traditions or the language of their ancestors, many still live in extreme poverty.